From Feel the Bern, the above video distorts history and defames Israel

And once upon a time he was a Jew, working in Israel.  Now, he isn’t advertising it.

Instead, he portrays himself as an agnostic Jew, not practicing his religion, but apparently trying to be more popular because of it.

NBC gave him a “two for” this past weekend.

Saturday Night Live viewers on NBC saw him spoofing the “typical” Jew, just getting off the early 20th century ship, boasting a European cap and accent, enjoying his name change to be more accepted by the Gentiles. This performance was Bernie’s donation to stereotyping Jews as self-involved schleps, while subtly contrasting himself with the no-good, strong, proud Jews of Israel. Rochester would be proud. “Yes, Mr. Bernie!”

Meet the Press on NBC Sunday showed another side of Sanders. When asked about foreign policy experience, he actually said:

We’ve talked to people like Jim Zogby, talked to the people on J Street to get a broad perspective of the Middle East. 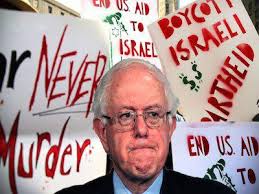 James Zogby is the president of the Arab American Institute. J Street supports the Iran deal with U.S. and has promoted a Palestinian state.

Both J Street and Zogby have continually criticized Israel for its policies in the Palestinian territories. No mention was made by Sanders of any pro-Israel experts.

Sanders has said that he thinks the Palestinians should get more financial help from the U.S., and Israel should have its military aid cut. He almost agrees word for word with Arab League proposals, when he explains.

Again, I think that you have volatile regions in the world, the Middle East is one of them, and the United States has got to work with other countries around the world to fight for Israel’s security and existence at the same time as we fight for a Palestinian state where the people in that country can enjoy a decent standard of living, which is certainly not the case right now. My long-term hope is that instead of pouring so much military aid into Israel, into Egypt, we can provide more economic aid to help improve the standard of living of the people in that area.

Sanders appears to follow the ideas of the George Soros’ Open Society Foundations and the dozens of offshoots and groups it supports.

Soros was convicted in 2005 for insider trading by the French Court of Appeals. The French Supreme Court confirmed the conviction on June 14, 2006, but reduced the penalty to €940,000. He is known as “The Man Who Broke the Bank of England” because of his short sale of US$10 billion worth of pounds, making him a profit of $1 billion during the 1992 Black Wednesday UK currency crisis. Soros is reportedly one of the 30 richest people in the world. 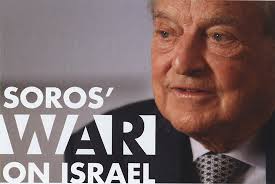 The NGO-Monitor watchdog group has issued a report on the Soros OSF, which notes that among top beneficiaries of OSF funding is Human Rights Watch, which has been criticized for targeting, and falsely libeling, the state of Israel. Another is J Street, which describes itself as “pro-Israel” but has been termed anti-Israel by others for, among other things, welcoming proponents of a boycott on Israel at its national conference and honoring IDF soldiers who refused orders.

OSF funding includes the Institute for Middle East Understanding, run by staff members, who have accused Israel of war crimes and have termed Israel an “apartheid state.”

Among the Israeli recipients is Adalah, which promotes the so-called “right of return” to Israel. This would allow millions of descendants of Arabs who fled Israel during the War of Independence to claim Israel as their home, ignoring the many more Jews displaced during the fighting and in the years that followed.

OSF also funds Al Haq, an Arab organization based in the Palestinian Authority-controlled city of Ramallah, north of Jerusalem. NGO said Al-Haq director Shawan Jabarin is “a human rights campaigner by day and a terrorist by night,” who is among the senior members of the PFLP terrorist group.

“There is no comparable focus by Soros family and OSF gifts or his foundation network on promoting democracy or economic development in Palestinian society, nor on surrounding Arab societies,” it added.

Soros has also been active in the U.S., funding many organizations, including the Clinton-associated Center for American Progress. Between 1979 and 2015 Soros donated more than $11 billion to various philanthropic causes.

In October 2013, Soros donated $25,000 to Ready for Hillary, becoming a co-chairman of the super PAC’s national finance committee, Wikipedia noted. In June 2015, he donated $1 million to the Super PAC Priorities USA Action, which supports Hillary Clinton in the 2016 presidential race. Since then he has donated an additional $6 million to the PAC to support Clinton.

It’s easy to understand why Hillary might benefit from association with a hedge fund manager. Bernie’s attraction to Soros’ group thinking can be explained by his desire to be accepted and admired by non-Jews everywhere. But perhaps, he is just incredibly naive and really does resemble that dope just off the boat on SNL, and not the dangerous rube on Meet the Press.

13 thoughts on “Sanders and Soros and Clinton – enemies of Israel?”