John Glaser and Justin Logan, writing on the CATO Institute website have claimed that the deal with Iran to delay making atomic bombs “is an historic achievement that decreases the likelihood of an Iranian nuclear weapon and forestalls the risk of another costly U.S. war in the Middle East.”

The near-consensus among arms controllers is due to the deal’s strong nonproliferation features. Under the deal, Iran would reduce its stockpile of centrifuges by two-thirds and dismantle about 97% of its low-enriched uranium. For 15 years, the Iranians will be prohibited from enriching any uranium at their Fordow site and the Arak reactor for plutonium production would be permanently disabled, CATO braintrusters assert..

Throughout, Iran would be subject to one of the most robust and intrusive inspection regimes in the world, with continuous video monitoring of its uranium mines for the next 25 years and monitoring of centrifuge production facilities for 20 years. Expanded inspections under the Additional Protocol are permanent.

The CATO Institute is a libertarian organization founded as the Charles Koch Foundation in 1974 by Ed Crane, Murray Rothbard, and Charles Koch.

Yes, that Charles Koch, darling of the conservative wing of the GOP, son of Fred Koch, founder of the John Birch Society. Originally, CATO was called the Charles Koch Foundation, but for some reason the name was changed. Koch Industries is the second largest privately held company by revenue in the United States in 2011, according to Forbes, the last time that list was released. Private companies are usually described as “mom and pop” operations by conservatives, although this one employs about 60,000 people in the United States and another 40,000 in 59 other countries.

CATO is the brainchild of the Kochs, so why would they espouse this on their website?

But the question in the context of nuclear diplomacy was never a choice between a neutered, Israel-recognizing liberal Iran or an empowered nuclear theocracy. It was between a nasty but weak regional power with little power-projection capability, closer or further away from a nuclear weapons capability. And on these terms, the agreement must be viewed as a clear success.

With a desire to further confuse you, in August some 450 conservatives attended the annual Koch confab to plan future policy. 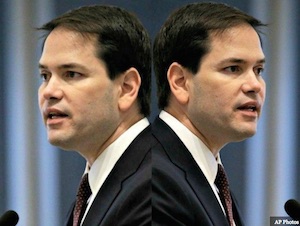 Each of the five has been quasi-endorsed by Koch. Missing were Donald Trump, Mike Huckabee, Ben Carson, Rick Santorum and Chris Christie. The omissions indicate who is establishment/Koch and who is an outsider.

Cato favors the Iran deal. Cato is the Koch brain trust. You would think that Cruz, Bush, Fiorino and Rubio would also favor the deal. But…

President Obama’s nuclear agreement with Iran can be undone by the next occupant of the Oval Office, Sen. Marco Rubio (R-Fla.) said.

“This is not a treaty, there’s nothing about this that’s binding on the next administration,” Rubio, a presidential candidate, said on Fox News’s “America’s Newsroom” .

He vowed to strike down the deal and institute harsher economic sanctions on the Islamic Republic if he wins the White House.

Is this a fluke? Here’s what Ted Cruz said about the Iran deal in a Politifact article:

Along with Donald Trump and the Tea Party Patriots, U.S. Sen. Ted Cruz, R-Texas, spoke out harshly against a nuclear agreement with Iran at the U.S. Capitol. When the rally was over, Cruz followed up by tweeting out video clips of some of his comments.

“The Iran Deal will facilitate and accelerate the nation of Iran acquiring nuclear weapons,” he said in a tweet on Sept. 9, 2015.

And there is windy Jeb Bush:

“The reported details of the Iran deal include significant concessions to a nation whose leaders call for death to America and the destruction of Israel. Iran remains a major destabilizing force in the region, working against American interests. Today, the Obama administration has agreed to remove U.S. and international sanctions, while permitting Iran to enrich uranium using most of the centrifuges in use today, conduct research into faster, next generation centrifuges, maintain an underground, hardened facility at Fordow, and expand its ballistic missile capabilities. It fails to obtain a guarantee of sufficient inspections. Iran isn’t required to disclose its past weaponization activities and many of the deal’s provisions will expire in the near future.

These negotiations began, by President Obama’s own admission, as an effort to deny Iran nuclear capabilities, but instead will only legitimize those activities. Nothing in the deal described by the administration this afternoon would justify lifting US and international sanctions, which were the product of many years of bipartisan effort. I cannot stand behind such a flawed agreement.”

Carly Fiorina, who is still in the nomination race, was even firmer (and windier): 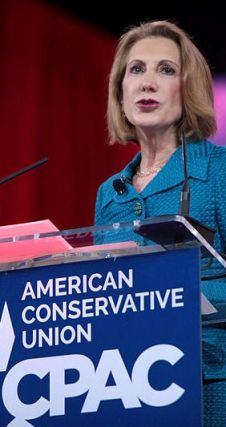 “The deal that the United States has negotiated with Iran poses a grave threat to American security at home and abroad. U.S. officials know that Iran has had a long-term plan to gain a nuclear weapon and destabilize the region through its support of terrorist organizations. And it is known that President Rouhani has never agreed to full and unfettered United Nations inspections of Iran’s nuclear facilities. The Iranian government has repeatedly, flagrantly violated sanctions put in place by the United Nations. We know that they have flat-out lied about every nuclear facility they have built over the last three decades.

This is not the behavior of a potential ally or of a partner. These are the actions of a country trying to bluff its way into persuading the United Nations, the United States, and its allies to allow it the freedom to develop a nuclear weapon for military purposes. Because of these facts, we cannot trust anything they sign.

Until Iran is prepared to (and opens its nuclear facilities to) full and unfettered UN-sanctioned inspections and demonstrates that they are willing to halt uranium enrichment, we cannot place any trust in any deal that is made. …This is not an agreement which will make Americans proud. It is not a deal that demonstrates our strength and resolve at home and abroad. Our allies will not point to this as a signal of our continued support.

Would it be cynical to say that some politicians tell us what they think we want to hear, and then do what they want when they take office. The GOP business wing of the party knows that the Iran deal is good for making money, the same money that has gone into super PAC coffers of Bush, Cruz, Fiorina and Rubio. Would they lie to the voters or their handlers, given the choice?

While Emma Ashford, Cato Institute, was defending the nuclear deal last week, Iran was on a spending spree:

That deal making was only made possible by the lifting of international sanctions in John Kerry’s infamous “negotiations.”

Unlike GOP establishment candidates like Cruz and Rubio, Dems Hillary and Bernie fully endorse the Obama non-doctrine. If the GOP hopefuls win, they will change their mind to please the Kochs, but the Democrats can just go on as usual, and have Cato support for their Iran stance.

Some Cato endorsements of the Iran deal (for disturbing reading):

3 thoughts on “Koch & Iran deal – GOP candidates may be liars”