Leave it to the greedy politicians and their wealthy puppet masters to come up with yet another “reform” that will benefit the upper class at the expense of the other 99%. This time it’s called the “Fair Tax”, and it’s made of fairy dust for the entitled.

Every GOP candidate for President appears to have been told this is the official goal for the year. It’s now a mainstay for every  conservative campaign, along with the standard “reforms” – abolishing Medicare (offering instead, a stipend to buy an imaginary “inexpensive” private plan for 70, 80, and 90-year-olds), plus. the usual GOP and “centrist” Democrat brainstorm to hike the retirement age for Social Security to 69 or 70 at first (and then increase it annually, according to END_OF_DOCUMENT_TOKEN_TO_BE_REPLACED

Now that nearly everyone, of every persuasion, seems to want to be married, seniors should advise the newly matrimonial-prone that true love expressed can cost you big bucks, when dealing with Uncle Sam. Here is a mock 1040 for a mythical single filer Herman Schmidlap: 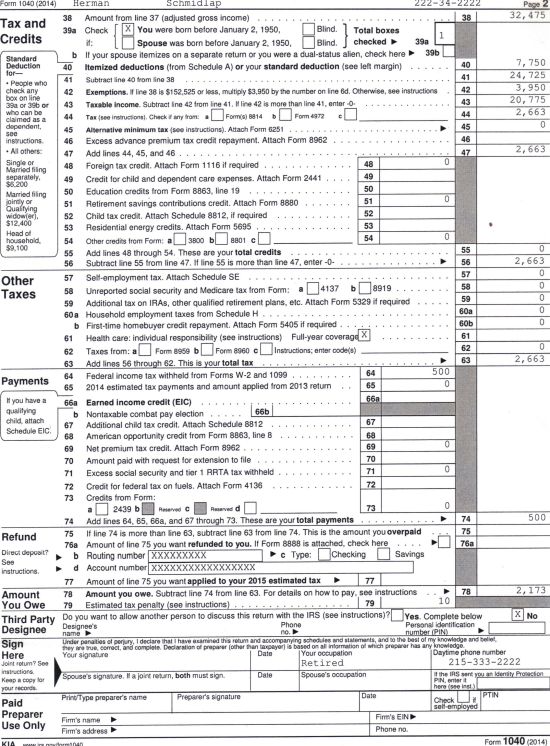 Herman is filing single, and the return would be the same if filed as “married, but filing separately.” His wages were $15,000, plus $10,000 he was required by RMD to take from his IRA or face penalties, plus $25,000 Social Security Benefits. He has a $25,000 END_OF_DOCUMENT_TOKEN_TO_BE_REPLACED

Jeb Bush is running on a platform to raise the retirement age for full Social Security benefits to 69 or 70. Other Republicans , except Mike Huckabee and Donald Trump, all seem to agree, with many also urging we move the minimum retirement age from 62 to 65. That single change would remove three years of benefits from early retirees, and at 70% of full benefits, would mean about $60,000 less payment to the average elderly couple.

Hillary wants a commission, just like the one in 1983, which unfortunately raised the retirement age from 65 to 67, and also reduced benefits for early retirees.

When asked in 2008 if she would agree to raise the FICA wage limit, so the rich paid more into Social Security, Hillary said: END_OF_DOCUMENT_TOKEN_TO_BE_REPLACED

Social Security benefits the poor less than the rich when you look at statistics.

Poor men live about ten years less than rich men (top 10%). Middle class men survive about five years less than the top 10%. The survival gap between men and women is stark for the poor, but doesn’t exist for the rich. Why?

The poor work harder, usually at menial jobs, sometimes two jobs. They have little money or time to relax. They worry and work themselves to death. Poor women often struggle with two jobs to support children, and increasingly lower wages for the bottom jobs hits them hardest. The rich can relax and even hire folks to worry about what luxuries to buy, what $10,000 a night hotel to visit, what $20 million condo would be the best investment.

Everyone who has time to check the facts, knows this. The graph above is from END_OF_DOCUMENT_TOKEN_TO_BE_REPLACED

In one of the more blazing antisemitic addresses revealed on video – now removed from YouTube and other sites – the religious teacher at the Al-Aqsa Mosque, Sheikh Khaled Al-Mughrabi, who is on the payroll of the Waqf (the Palestinian Authority religious leadership), for using his class to promote the infamous blood libel screed that ‘explains’ why the Nazi Holocaust took place. This ‘Blood Libel’ is a Christian medieval lie that accuses Jews of using the blood of children to make Passover matzoh.”

“The Temple Mount is a site of ultimate religious importance to Judaism and revered also by both Christianity and Islam. It should be an area that promotes peace, tolerance, and mutual understanding. However, the Al Aqsa Mosque has now been used to repeat horrific lies and legitimize genocide. Left unchallenged, the Sheik’s ‘sermon’ will only spawn more hatred and violence,” the letter said.

An excerpt from his mad rant follows:

The Children of Israel have more than one god… They say that our god is number ten. It’s an internal (secret) matter of theirs… END_OF_DOCUMENT_TOKEN_TO_BE_REPLACED