Healthcare.gov has my email address, because I once searched for plan information on the site, and now the artificial intelligence – or just perhaps an algorithm – has decided to pester me to sign up or pay a penalty. Having fooled the system (because I can’t get Obamacare since I passed my 65th birthday), I checked some prices to see the cost of  plans for my neighbors, assuming a family of two parents and two teenage children.

It’s not a pretty picture. Without premium subsidies, all of the so-called Obamacare Bronze plans cost about $900 a month, or $10,800 a year. All of them have a deductible of about $12,000, which adds up to a total cost of $22,800 – before you receive one penny of health insurance. It’s all on you – just put pennies in the jar each January and set aside 2,280,000 as your personal Copper plan. Actually, someone should call the coppers for allowing such a ripoff junk health plan.

The missing ingredient in this analysis is that the government (middle class taxpayers) provides a subsidy to our average $50k-a-year household of four, amounting to $800 or so per month. That money goes directly to the insurance company. You pay the difference in premiums and you also pay all that $12,000 deductible. It seems insanely expensive – between contributions from taxpayers and subscribers – and some might say a windfall for insurance companies, a deal that was negotiated by Chicago’s current mayor under assault, who is also a former investment banker.

The Democrats may have bowed to the healthcare industry, prostrated their principles, humiliated party members, destroyed the President’s legacy and may even made Valerie Jarrett unhappy, but things might get even far worse.

Enter the GOP and its brainiacs at the Heritage Foundation. They have a plan that makes Obamacare look like heaven with 72 virgins (persons, of course) and unlimited six packs of END_OF_DOCUMENT_TOKEN_TO_BE_REPLACED

British Labor Party leader Jeremy Corbin is starting a campaign against inequality that should be emulated by all (five, ten?) American politicians not controlled by big business.

“One proposal is pay ratios between top and bottom, so that the rewards don’t just accrue to those at the top,” he said.

“Of the G7 nations only the US has greater income inequality than the UK, and pay inequality on this scale is neither necessary nor inevitable.”

Corbin is talking about real compensation – wages, salaries and bonuses – while many reports for the American public will note an executive $1 million wage, but exclude their $12 million bonus. That trick is good PR for the overpaid, but not good statistics when comparing worker to CEO. Also not mentioned is that company owners (with no work required) usually make much more than the executives. When comparing apples to apples, the mismatch is onerous.

“Total direct compensation for 300 CEOs at public companies increased 5.5% to a median of $11.4 million in 2013, concluded an analysis by The Wall Street Journal and Hay Group. A separate AFL-CIO study of CEO pay across a broad sample of S&P 500 firms showed the average CEO earned 331 times more than the typical U.S. worker last year. In 1980, that multiple was 42,” according to a report in the Wall Street Journal in November, 2014. 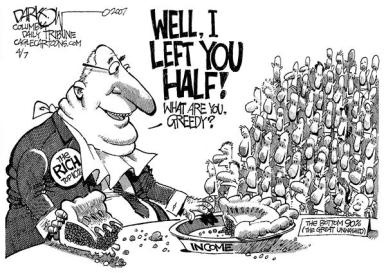 The record of being the most unequal of G7 nations – Canada, France, Germany, Great Britain, Italy, Japan, and United States – is a distinction without merit. So-called pay inequality solutions here include lowering the taxes on the highest paid, sheltering savings of the richest Americans, and maintaining government subsidies to the poorest workers (EITC), rather than really raising (not $10.10) the minimum wage. And those negative plans are the ones endorsed by many in the Democrat Party. Most in the GOP also want to privatize everything from national parks to public roads and schools – in short, anywhere a buck can be squeezed.

“Another proposal would be to bar or restrict companies from distributing dividends until they pay all their workers the living wage,” Corbin explained.

“Only profitable employers will be paying dividends, if they depend on cheap labor for those profits, then I think there is a question over whether that is a business model to which we should be turning a blind eye.”

During the 2008 financial crisis, it was common that many, running for public office, also espoused caps on highest salaries to five or ten million dollars. END_OF_DOCUMENT_TOKEN_TO_BE_REPLACED

“It is not a question of substituting one ruling clique for another, but of changing the very methods of administering the economy and guiding the culture of the country. Bureaucratic autocracy must give place to Soviet democracy. A restoration of the right of criticism, and a genuine freedom of elections, are necessary conditions for the further development of the country. This assumes a revival of freedom of Soviet parties, beginning with the party of Bolsheviks, and a resurrection of the trade unions. The bringing of democracy into industry means a radical revision of plans in the interests of the toilers. Free discussion of economic problems will decrease the overhead expense of bureaucratic mistakes and zigzags. Expensive playthings—palaces of the Soviets, new theaters, show-off subways—will be crowded out in favor of workers’ dwellings. ‘Bourgeois norms of distribution’ will be confined within the limits of strict necessity, and, in step with the growth of social wealth, will give way to socialist equality. Ranks will be immediately abolished. The tinsel of decorations will go into the melting pot. The youth will receive the opportunity to breathe freely, criticize, make mistakes, and grow up. Science and art will be freed of their chains. And, finally, foreign policy will return to the traditions of revolutionary internationalism.”

In late October 1960 I watched John F. Kennedy in a motorcade at Kensington and Allegheny avenues (K&A) in Ward 3 of Northeast Philadelphia, waving to a huge crowd of Irish residents, overwhelmed to tears in some eyes, but nearly all overjoyed with the chance he would be the President. I was just 19 and though not old enough to vote (the age was 21 then), that excitement of a political revolution and government change was intense. 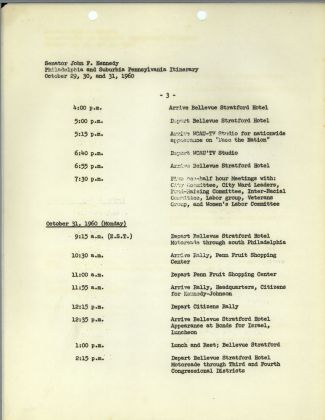 After the parade passed and the crowd left, I looked for something to do. My home was just a few blocks away and the “corner” boasted two large movie theaters, a Horn and Hardart, two “five and dimes”, and it was Monday afternoon, just after 4, too early for dinner, too late for lunch.

I spotted a pair of card tables with signs and pamphlets, but more important, an attractive girl to ply away some time. That began months of involvement with her and the Trotsky-inspired Socialist Workers Party, a  group dedicated to changing our economic system to restrict capitalism and enhance worker control of the means of production. I learned much of the support of the group was from young, wealthy suburban youth, and many of the leaders spoke with a Russian grumble.

The party was under attack and membership at Girard avenue and Broad street headquarters was only a few dozen, but you did get membership cards – flimsy and mimeographed. We were recruited for marches in front of the White House, picketing END_OF_DOCUMENT_TOKEN_TO_BE_REPLACED

With the exceptions of Mike Huckabee and Donald Trump, all of the Republican candidates for President want to change Medicare so that it costs you much more, but guarantees profits for campaign-funding insurance companies.

The details are in the Heritage Foundation plan to replace Medicare with a “premium support” plan in which you buy Medicare on the open market and the government reimburses you, based on the lowest price from solicited private bids:

Last week, I blasted the foundation for its miserable plan for Social Security. Their suggestions for Medicare are just as bad. What would such a plan cost, and what would be

its benefits to seniors? An examination of a typical Obamacare plan for a single 64-year-old may reveal some answers.

We couldn’t compare plans for 70 or 85-year-olds, because Obamacare won’t allow them for anyone past their 65th birthday. Since someone in their 90s requires more care than the average 64-year-old, whether Heritage blends rates (one rate for all) or age adjusts like Obamacare, premiums could easily be twice as much. What’s the difference, you might ask, if the government pays all the premium cost? Keep reading and learn why.

The cheapest (Bronze) Obamacare plan in Montgomery County, PA this morning was $533 a month for a single person, or $6,396 a year. Under the Heritage plan for Medicare this seems like a likely low-ball comparison – many co-pays, no dental or hearing aids, etc. In addition, there is a