The Communist Party is watching – and punishing – many citizens of China today, and in 18 months everyone will be judged by their Social Credit – a number earned by absolute obedience to government rules, always behaving nicely, and paying your bills promptly.

During the experimental period since 2015, those with low scores had their travel restricted: 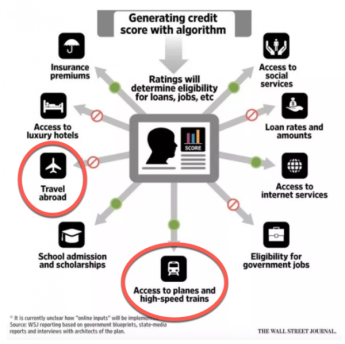 When the entire country is included in 2020, even your Internet connection speed will be throttled if you spend too much time playing video games or posting on social media.

You, or your children, can be banned from the best schools if your credit score falls too low. In July, a Chinese university denied an incoming student his spot because the student’s father had a bad social credit score.

If you are caught with your dog unleashed, the state can take it from you, as well as lowering your score.

The State Council said that under the national social credit system people will also be penalized for the crime of spreading online rumors,  and that those deemed “seriously untrustworthy” can expect to receive substandard services.

Ant Financial’s CEO Lucy Peng, said the program “will ensure that the bad people in society don’t have a place to go, while good people can move freely and without obstruction.”

In George Orwell’s 1984, citizens were controlled by “Big Brother” and feared the Ministry of Truth. China has an even better name for its elite controller – the Central Leading Group for Comprehensively Deepening Reforms (CLGCDR).

Like the NSA/FBI/CIA combine, this Chinese enforcer can gather facts from the country’s social insurance database and criminal records system, as well as information gleaned online or from phone calls and emails.

The government will not only penalize citizens who have failed to pay fines or taxes, for example, but also go after those the government deems guilty of “spreading false information and causing trouble.”

An excerpt catches the fake empathetic tone of the authors:

Part of the Strengthen rewards and incentives for subjects to keep trust.

Expand rewards and propaganda strength for trust-keeping acts. Grant rewards to enterprises and model individuals keeping trust according to regulations, broadly propagate them through news media, and forge a public opinion environment that trust-keeping is glorious.

While it is difficult for most Americans to even imagine such a system here, the Jeff Bezos’ Washington Post warns us not to be alarmed:

Social governance in the digital age is a global challenge. Rather than instantly dismissing China’s unconventional governance innovations, we need an open-minded discussion of the pros and cons — one that is sensitive to the challenges and priorities of different cultural and political contexts. – 11/29/2018

Bezos, who also owns Amazon, is the richest man in the world (now est. $135,600,000,000). For him, controlling the behavior of the masses has advantages. If you always know exactly what the peasants are doing, you can quash criticism and know in advance of any plans to increase your taxes or regulate labor standards. Whole Foods anyone?

How far away is America from the government knowing everything we do?

And instead of inventing a new credit score number, why not use everyone’s FICO score, which will be constantly changing as more data reaches the government, and available as an app on your smart phone to stare at in awe?