Should government focus on public services or needy services?

The argument is whether we should provide benefits or programs to both rich and poor – even though higher income folks can afford to pay for these with ease.

If we have a service or program, such as public schools, universal public healthcare, or even public childcare for all – why not open it equally to all members of the public. That will keep government from creating  a separate class of people, who are stigmatized by qualifying for a public service – just because they are poor.

How humiliating! Should these recipients be made to wear a green star? Walk on the other side of the street? Keep their gaze averted from ours? Many proud families do not apply for such “aid”, refusing to be classified as bottom dwellers of society.

With a fair, progressive tax system, the wealthy would pay a higher percentage of income taxes, and corporations, fair taxes. The wealthy also should be included in every public program, because they are supporters these public efforts.

In practice, the very rich will probably not need many of these public programs, and instead, will avail themselves of very expensive replacements of their own making. But that is on them. We already mostly agree  that there should not be a means test for public parks, highways and the stigma of drinking fountains for the poor (free), and the rest of us, 25 cents.

Taking the upper and middle classes out of public programs, insures that a so-called lower class (less income, but not less human) feels unequal equal to other Americans, and becomes isolated from the very middle class to which it aspires.

Any means-testing destroys the ideals of a public good, and replaces it with some calculated charity from political “benefactors.”

The regressive benefits now delivered from Social Security are a good example of so-called means-testing, where upper middle class earners are starkly penalized with lower percentages of overall benefits and the lowest earners receive three or four times the benefit percentage. (see chart below) 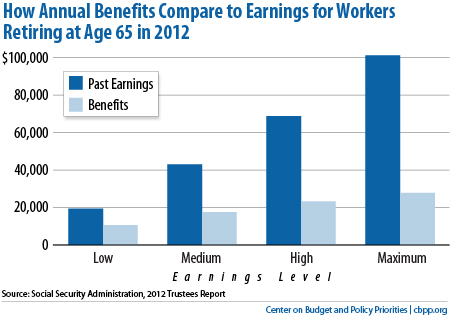 Such a charity approach is losing support for this pension program, because it has been converted to a part welfare system. The solution here is a fair basic Social Security benefit for all, supplemented by a pension based purely on wages earned and FICA taxes paid.

In another tragedy for seniors means-testing Medicaid – instead of offering universal Medicare to poor and rich – forces families to “spend down” nearly all the elder’s assets, just to enter a nursing home, and forces them to the very bottom of the income ladder.

In the same vein, one of the great mistakes of Obamacare is its extra help to the poor and its sliding scale of subsidies. The goal should be “free” all the way up to the top, and at the same time, fair progressive taxes to insure public programs available to all who want them. The only other alternative is to privatize public services, which puts a fee on users and crushes the poor.

Surely, if we deem a service universal there should no fee to exclude the needy, just as there should be no means test to exclude the wealthy. Higher progressive income and excise taxes will lift some of the burden off the average American and insure democratic access without stigma of “getting something” extra from the government.