In November a Food and Drug Administration (FDA) advisory panel is expected to approve the use of a Merck drug to treat the Covid virus. It claims to reduce symptoms and slice the number of hospitalizations.

Most victims today are told to stay home after a positive virus test, and they are not seriously treated unless so sick they must be hospitalized.

Merck has a better idea – treatment at the onset of the illness to prevent the victims from getting sicker. Until now, that’s how other illnesses are handled – instead of just relying on vaccines for prevention, or critical care if patients are nearly dead.

Good news: the drug – molnupiravir (MK-4482) – is a convenient pill, which can be stored on a shelf without degradation.

Bad news: it won’t be cheap for American taxpayers, who will fork over $712 per treatment, thanks to a U.S. government contract last year to buy 1.7 million treatment courses for $1.2 billion, as soon as the drug receives regulatory clearance.

It doesn’t cost $712 to manufacture the five-day course of pills. India is preparing to sell an equivalent for $12, partly because production costs are cheaper there, but mostly because there is less greed and more regulation, compared to the “free-for-all” market here.

This drug was developed by Emory University, using U.S. government taxpayer funds in 2003, and then licensed by Ridgeback Biotherapeutics last year. FDA authorization was stymied in 2020, forcing Ridgeback to go to Merck.

Researchers have reportedly pegged the cost of production at $17.74 here, meaning any price above $20 would yield big profits if billions of doses are sold.

“This price ($712) is equal to about 35 times the estimated sustainable generic price,” according to Melissa Barber of the Harvard T.H. Chan School of Public Health and Dzintars Gotham of the King’s College Hospital.

That’s also 46 times as much as Indian manufacturers plan to charge for a generic version, according to Leena Menghaney, the South Asia head of Médecins Sans Frontières Access Campaign.

After public criticism of the cost of the  antiviral, a Merck executive, Dr. Nicholas Kartsonis, said the price it charged the U.S. government isn’t the final figure.

“We set that price before we had any data, so that’s just one contract,” Kartsonis told the AP.

Obviously we’re going to be responsible about this and make this drug as accessible to as many people around the world as we can, he claimed.

But Merck is not changing the contract, and it still wants to charge Americans the highest price, while it negotiates low prices with other countries.

A press release said Merck was “committed to providing timely access to molnupiravir globally, if it is authorized or approved, and plans to implement a tiered pricing approach based on World Bank country income criteria to reflect countries’ relative ability to finance their health response to the pandemic.”

That means charge the suckers in America dozens of times what the folks in other countries are willing to pay.

Check out this logic:

Merck’s drug is lower than a lot of the other treatments right now … and certainly a lot cheaper in the United States than ending up in a hospital,” according to James Love, director of Knowledge Ecology International.

Remdesivir – the only approved treatment for the hospitalized cases – costs a few dollars to produce and was sold to the U.S. government for $2,340 a course. Monoclonal antibody courses, used to treat mild or asymptomatic virus cases, are about $2,100 per course. 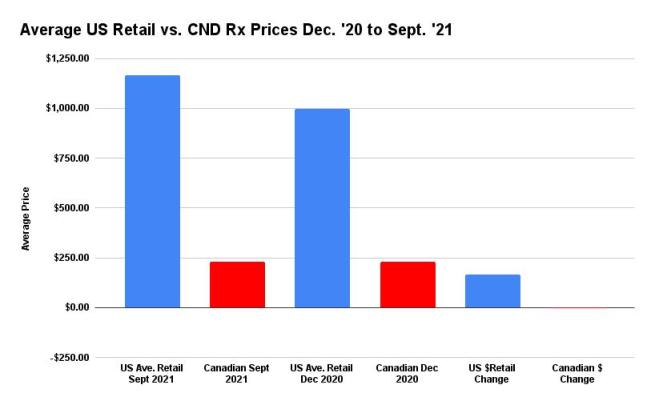 This comparison reflects prices for 90-day supplies of the same top-selling brand-name medications, using the most common strengths prescribed to patients. Prices recorded as of September 28, 2021.