Millions of Americans have died because they couldn’t afford to pay for prescription drugs that might have saved their lives, and millions more stay in horrible jobs just to hold on to company/worker sickness insurance.

How the dangerous gamble to not take an expensive drug evolves:

You don’t have health insurance and are diagnosed with an illness and prescribed a drug that will keep you alive or save you from immense pain for a few extra years or even a lifetime. Tragically, that drug costs a fortune to you.

As a middle-class American, you are ineligible for Medicaid until you sell everything you own and no longer earn more than minuscule wages. If you don’t want to impoverish your family, you refuse the drug and die early or in great pain.

This is not a problem if you are a member of Congress or live in Beverly Hills or Martha’s Vineyard.

Unfortunately, the folks ordering the rules, and passing the laws, have health insurance that pays nearly all their drug and other medical bills. Politicians get this for their lifetime with no co-pays or deductibles. The rich can always afford whatever they need or want.

The elite class has no clue how the peon class suffers.

A lady in a kind of miserable job recently explained to me that she had very good government-paid health insurance and couldn’t find another job where her son’s particular drug prescription would be covered.

Price of that drug? About $25,000 a month to give him a chance to fight cystic fibrosis and stay alive.

The U.S. is among countries with the highest incidence of CF, with some 30,000 people currently living with the disease. Around 1 in 2,500 to 3,500 Caucasian babies are diagnosed with CF in the U.S. This ratio is much lower among African Americans at 1 in 17,000 births, and even lower for Asian Americans at 1 in 31,000, according to the Cystic Fibrosis Foundation.

You might ask why use this drug, when other CFTR Potentiators are available? We went to trusty GoodRX to explore all the other similar drugs, and this is what we learned:

It appears these drug companies are colluding to fix prices to compete only on the basis of their marketing with tv ads and their doctor largess. So much for “free market” forces in the midst of antitrust actions that rip off the sick.

Donald Trump, despite his own party’s leadership opposition, pushed for importing drugs from overseas, negotiating for Medicare drug prices, and using international pricing to save billions for American consumers.

His drug rule executive orders would have taken effect early this year, but were blocked by Joe Biden as he countered the prior President’s rulings with his own, beginning the very day of Inauguration.

Biden backtracked from his prior campaign promises and threw the drug price issue back to Congress, where it has lingered for decades. Even with a $4 trillion proposed “stimulus” package, Biden had no appetite for drug price reform.

It is not a revolutionary idea that Biden rejected. European countries all negotiate for reasonable drug pricing for their universal healthcare systems. If a drug is vital and no price agreement is reached, the country will order a generic equivalent allowed – the strongest incentive for drug firms to price fairly.

But the bill may just be another political trick, where the elites announce an improvement to our lives, but it never happens, because of some “unforeseen” development.

This time that rat in the woodpile is already in place, and it’s name is Rep. Scott Peters (D-CA) 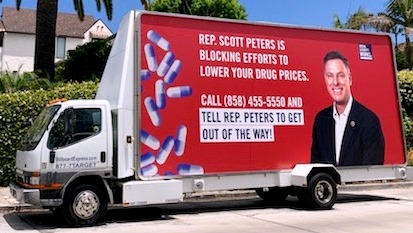 Rep. Scott Peters’s constituents deserve to know―so we’re driving a billboard truck around his California district this week. We’re sending a message to Rep. Peters: Stand up for your voters, not your fat cat campaign donors!

There’s nothing moderate about handing a blank check to Pharma. Democratic, Republican, and independent voters all want Congress to lower drug prices. Scott Peters doesn’t care. He is working for his Big Pharma donors, not for voters. So we’re making sure that his constituents know it.

Billboard trucks work. We ran a similar truck in Rep. Jake Auchincloss’s district in May, and he recanted his Pharma-fueled obstruction within the week.

Peters voted for the H.R. 3 drug reform bill in the prior Congress. Now, he claims to have cast that vote knowing it had no chance of becoming law at the time. He said he supported it only to “start a conversation about lowering the cost of prescription drugs.”

Peters is an admitted weasel, pretending to support drug price cuts by voting for a bill that would not pass anyway, allowing him to get public support and then offer a sneaky wink and nod to the drug industry.

Because the current push for approving drug pricing reform has a good chance in the now tied Senate, Peters and other allies of Big Pharma are concerned that it might actually pass and cost their corporate buddies hundreds of billions.

Pelosi can only spare two Democratic defections on partisan legislation because of the Dem’s slim House majority.

In a tribute to double talk itself, Peters explained his opposition as:

It’s a better problem to have a cure or therapy that’s expensive and have to figure out how to get it to people than it is to not have the cure at all, and I’m afraid that’s what this version of H.R. 3 would leave us with.

Supporters of H.R. 3 acknowledge Democrats — particularly those facing reelection fights in swing districts — will be cowed by the powerful drug lobby to oppose the bill.

“There are some Democrats who will be nervous about this, but I think we can get them to support it, because it’s so meaningful for the people we all represent,” explained Rep. Peter Welch (D-Vt.), who sent another letter, one that urged Biden to endorse drug negotiations.

The drug industry issue has also awakened the recently sleeping Socialist, Senate Budget Committee Chair Bernie Sanders (I-Vt.), a formidable opponent, when not lost in the wilds of the Woke.

There is no state in this country — none where people don’t understand that the pharmaceutical industry is ripping them off,” he said.

No one can defend that we pay 10 times more than people in other countries. I think every one of my colleagues knows that, and I expect they will vote the right way.