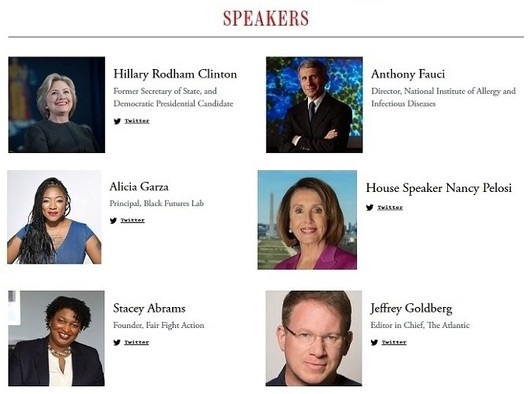 This assembly of critics of President Donald Trump, includes one registered Republican –  Maryland Governor Larry Hogan, who despises the President.

The Atlantic’s erstwhile editor, Jeffrey Goldberg, will host the event. He recently claimed Trump had disparaged the U.S. military, when the President was unable to attend a war memorial site.

Trump had 27 witnesses refute that accusation, which was probably woven from Trump’s claim – expressed in the past – that volunteers for the Vietnam War were being sucked into a useless, deadly conflict. Such an opinion has been shared by others, including 2004 Presidential candidate John Kerry, who infamously pretended to throw away his medals to protest that war, which killed more than 50,000 Americans.

Bob Woodward will close out the festival on Thursday, interviewed by Goldberg about his new book, Rage. Woodward, the renowned investigative reporter and associate editor at The Washington Post, will take part in the final night of the festival’s events…

The Reverend Dr. William J. Barber II will be in conversation with Laurene Powell Jobs, founder and president of Emerson Collective, which is the majority owner of The Atlantic.

There is nothing wrong with 113 folks getting together to promote a partisan, progressive Democrat confab days before an election, except this:

The activity must be avoided if the outside organization engages in lobbying or otherwise takes public positions on matters of significant controversy involving the NIH.

In their own words festival promoters maintain this is a public, not private event:

For the first time, The Atlantic is making all festival events free to access, and expects to draw audiences across the country and the world. Events will be streamed live on The Atlantic’s site and other platforms and will be hosted on Tame, an interactive platform that will let attendees seamlessly enjoy all festival events.

And if you doubt that the focus is on one political party, the festival boasts:

All eyes were on the opening of last year’s festival, as Speaker Nancy Pelosi took the stage for an interview with Jeffrey Goldberg hours before announcing the impeachment inquiry into President Donald Trump.

In August Fauci also appeared as a guest of the Trilateral Commission – an ultra-elitist group with secret sessions and a globalist view.

There’s time (it’s just 4 p.m. as this post is released) for Anthony Fauci to cancel tonight’s speech and interview,

If not, in my opinion he should be investigated for violating the Hatch Act and censured for ignoring the rules of his own NIH.