Who is Joe Grogan? Hint: he is not the famous comedian – Joe Rogan.

Here’s the graph of his resume – revolving from industry to government and now the White House – enough to make your head spin from such swinging roles. 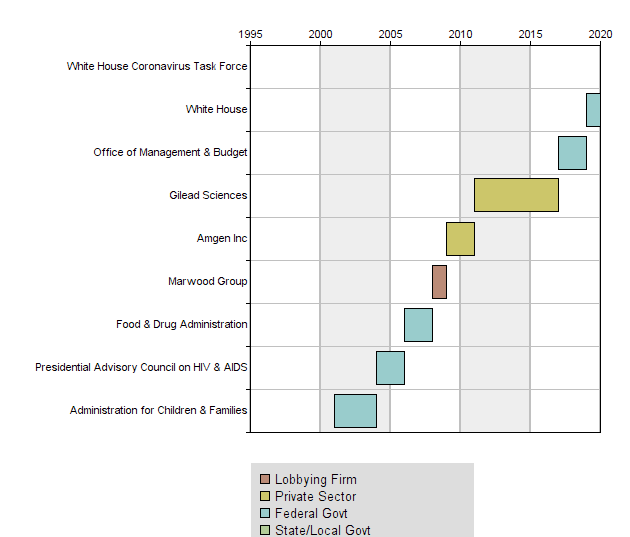 Is it possible for any lobbyist from Gilead Sciences to be fair and objective in determining our drug policy? Most of us believe you can put lipstick on a pig, but the beast will still revert to acting and thinking like a pig, and my instinct says Grogan is just a Revlon-enhanced pawn of Pharma’s pen of paid omnivores.

President Donald Trump has done nothing to fulfill his campaign promise of lowering drug prices, and many attribute that failure to advice from Grogan.

The latest Trump stumble is appointing Grogan to the Coronavirus (Covid-19) Task Force. The result is a fox in an already bureaucratic hen house, where members are focused on ultra safety, avoiding failure and – one wonders also – maximizing drug company profits.

For example, why is the task force, pushed by an aggressive Grogan, playing down the use of hydroxicholiquine to treat Covid-19, while seemingly seeking expensive alternatives.

The reason might be that this drug, used around the world and in the United States successfully, is a cheap generic with no room to overcharge and enrich the callous investor class.

In early March, Gilead sought and was subsequently granted an orphan drug designation (from the FDA) for the remdesivir as a potential treatment for COVID-19. Orphan drug designation is granted by the FDA in situations where the disease affects fewer than 200,000 patients in the United States, according to a Gilead press release.

Orphan drug means you can exclude use of generic equivalents for seven years and have a monopoly to fix its cost.

Gilead is not above charging astronomical prices if it gets permission. Two examples: Harvoni, a blockbuster Hepatitis C drug, costs $31,500 and Gilead’s Sovaldi, costs $28,000 – both per month!

Grogan, top health advisor to Trump, could have stopped the FDA giveaway to Gilead, or at least interrupted the President’s endless briefings to explain that it was obvious remdesivir was not orphan, and ultimately could be used on billions of patients, totally disqualifying it for a price-fixing monopoly.

Senator Bernie Sanders – who has finally stopped campaigning – heard about the FDA rollover to Gilead, and loudly ripped the agency and the drug company for their arrogant attempt to enrich Grogan’s former employer.

Gilead quickly relented and asked to withdraw the fake orphan tag in this press release:

Gilead has submitted a request to the U.S. Food and Drug Administration to rescind the orphan drug designation it was granted for the investigational antiviral remdesivir for the treatment of COVID-19 and is waiving all benefits that accompany the designation. Gilead is confident that it can maintain an expedited timeline in seeking regulatory review of remdesivir, without the orphan drug designation. Recent engagement with regulatory agencies has demonstrated that submissions and review relating to remdesivir for the treatment of COVID-19 are being expedited.

In its report on the 53 patients studied for use of remdesivir, Gilead revealed these adverse effects:

Four patients (8%) discontinued remdesivir treatment prematurely: one because of worsening of preexisting renal failure, one because of multiple organ failure, and two because of elevated aminotransferases, including one patient with a maculopapular rash.

Have government officials been playing down one drug – hydroxicholiquine – in favor of another one, not because of highest efficacy and safety, but because one will enrich Big Pharma and the other won’t.

Grogan’s graduation from Gilead to the White House violated Trump’s campaign-trail pledge to “drain the swamp” of D.C. corruption. He promised his administration would refrain from hiring lobbyists.

In 2017 White House budget director and ex-congressman Mick Mulvaney ignored the swamp-draining pledge and hired Grogan, who was then Gilead’s head of federal affairs. In the long run lobbyists took dozens of jobs in the Trump administration.

To watchers of Mulvaney it was no surprise he liked paid petitioners.

In April 2018, Mulvaney told a room of banking industry executives and lobbyists that as a U. S. Representative, he refused to take meetings with lobbyists unless they contributed to his political campaigns:

He was later named acting Chief of White House Staff.

Grogan invited Robert Shapiro, a member of a Gilead advisory board, to give a presentation to one meeting. The group never issued formal recommendations, but Business Insider said these were some of the highlights of sessions:

Some text in the working group’s documents was taken directly from papers written by the lobby group Pharmaceutical Research and Manufacturers of America.

In a few cases in recent years Grogan has been almost favorable to consumers, but his past adhesion to the drug industry, and continued favoritism, should disqualify him as an honest broker.

Meanwhile, Mulvaney has just been exiled to Northern Ireland, where blarney is more acceptable, Grogan remains in power, and Big Pharma awaits rewards.