DAVOS, the 2020 World Economic Forum (WEF), had special guests from the Club of Rome last month, and the question is why would the richest folks in the world invite an organization publicly advocating programs that supposedly restrict free markets and reduce capitalist profits? 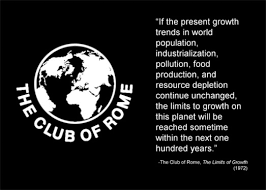 The answer is population control, a goal shared by both the very rich and some of the very idealistic. To them, fewer humans means less depletion of natural resources, thus prolonging these assets’ availability to those of us remaining.

That proposed paucity benefits the rich, who would control the size of your family, house and car, and inspires the utopians, who seem convinced that having less, means more virtue, and that sacrifice is a required rite for the righteous.

Which side convinced the other that world population decline was good for everyone? Was it the protected people at the top of the food chain, or the bottom dwellers most affected by human numbers and forced austerity?

Most of the Davos’ agendas look boring, but the very rich at this year’s confab should have been fascinated with the Club’s presentation on a growing global population that can’t be sustained by limited natural resources.

These bankers and industrialists see value in the Club of Rome’s austerity and solutions. Better the public should focus on thermostats, rather than their own inadequate wages. Nothing could thrill the people at the top more than a working class urging a lower standard of living for itself.

But you aren’t invited as a featured guest at the biggest party of the year if you aren’t a good friend. Strange irony is that activist groups, protesting outside the conference, seemed to agree with the Club’s aspirations, or did it only appear that way?

The Club and the deep pocket elites agree the danger is clear – too many mouths, and not enough food. That result spells unhappy citizens and a threat to folks whose highest priority is protecting their property and power.

Founders of the Club concluded a half century ago that there are only two solutions to an over-population disaster:

The battle to fulfill goal #1 has not been very successful.

Population has soared, despite systematic promotion of birth control, easier access to safe abortion, delayed marriages, extended school attendance for girls that reduces number of birthing years, as well as stagnant wages that require both husband and wife to work – creating prohibitive childcare expenses after one, or at most, two children.

Asian and European populations have dropped in recent decades. Meanwhile the U.S. has enjoyed growth since WW2, but that has now fallen to a non-replacement rate of 1.9 per couple

Another way to reduce population is through mass migration into Western democracies from poor nations. The theory is that newcomers will adopt the self-imposed reproductive limitations of advanced societies and have fewer children.

Solution #2 is working, Reduced resources for manufacturing, higher expenses for home and factory construction, limited financial access to cars and use of planes – all result in a lower standard of living in developed nations

The Club Of Rome was formed in 1968, and immediately focused on population.

A prominent part of the Club of Rome’s agenda was population reduction. In 1972 a group of Club “scientists” under the United Nation’s (UN) direction, published a paper called ‘Limits to Growth, which called for greatly reduced human population in the name of “saving the environment.”

This effort was directly linked to another agenda – the institution of a global government that could handle and enforce population controls on a wide scale. -Wikipedia

Here is a quote from The First Global Revolution, written by Alexander King and Bertrand Schneider, and published by Pantheon Books 19 years later in 1991. This Club of Rome treatise follows up on the The Limits of Growth:

In searching for a common enemy against whom we can unite, we came up with the idea that pollution, the threat of global warming, water shortages, famine and the like, would fit the bill. In their totality and their interactions these phenomena do constitute a common threat, which must be confronted by everyone together.

But in designating these dangers as the enemy, we fall into the trap, which we have already warned readers about, namely mistaking symptoms for causes. All these dangers are caused by human intervention in natural processes. and it is only through changed attitudes and behavior that they can be overcome. The real enemy then is humanity itself.

Another interesting Club of Rome quote:

Historically, fertility and mortality rates have fallen with higher levels of education and economic opportunity for women and girls. It is thus expected that current advances in human capital will impact the future size and age composition of the global population.

In a paper titled ‘Proper Earth Government: A Framework And Ways To Create It’ the UN’s Robert Muller explaine how climate change could be used to convince us of the need for universal government, including a new “global religion”, population controls and diminished nationalism.

…as described by Club documents. Select a section and then click individual member’s names for details

Full Members are “individuals of outstanding ability who share a concern for the future of humanity. Together, they currently represent over 30 countries in five continents and have a wide range of professional backgrounds. Potential new members are proposed by existing members to the Executive Committee.”

Honorary Members are purported “distinguished international personalities who support the work of the Club of Rome. They are typically ex-heads of state, notable scientists or business and community leaders of distinction.”

Associate Members are “individuals who are interested in the Club’s work and wish to support it. They may apply for membership or be proposed by other members; their application is accepted or rejected by the Executive Committee. Associate members are often those who have been Full Members but who wish to play a less active role, or those who may become Full Members in the future.”

Executive Committee members are appointed for three years and are eligible for re-election.

One thought on “Why was Club of Rome invited to attend the W.E.F. in Davos?”