Australia has always fascinated me, and not just because some of my ancestors moved there to help build that nation, along with millions of other “despicables” from Great Britain.

That continent and America were the freedom destinations for the Irish and English poor, who became indentured workers, toiling without pay for seven or more years to pay for their sea passage.

About half the American population in the mid 18th century were white and indentured, and even their children – born during such service – were automatically indentured until age 21 or older. In addition to indentured workers, Australia was a prison colony, and for a minor crime you were incarcerated and used as slave labor, often for life.

Let’s compare their minimum wage with our $7.25. 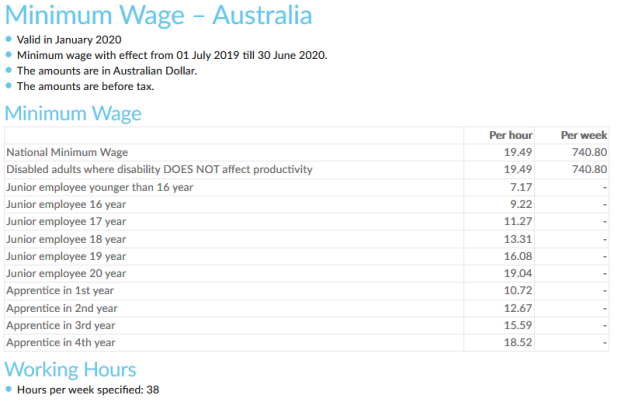 You will notice that the minimum wage is much lower for students and varies by age for everyone. Apprentices are paid less.

There are also minimum wage variations by industry and occupation.

This is an example: Australia Restaurant Pay Guide

Minimum wage can increase by $5 an hour in the example guide, and wages on weekends and holidays are much higher.

Where do we go from here?

Before the Raise the Wage Act, there has been no increase since the Fair Minimum Wage Act was passed in 2007. That long-delayed change raised the rate to $7.25 by 2009 – ten years ago.

Pessimism about passage comes from looking at the corporate-beholden members of the Senate, whose campaign donors are the very ones affected negatively by a fair wage for Americans. It can also be argued that the House passed the bill to get votes, realizing it would never become law because of Senate inaction.

Keeping workers competing for jobs and underpaid, while forcing both spouses to labor just to pay necessities, is a mantra of our profit-minded establishment.

If people on minimum wage want more money, they should just get a second job.

Even if they did, it would take more than two jobs to earn the $5 million annually that Payne is paid for sitting at a desk and prognosticating about the “little people” and their need to sacrifice to enrich their employers.

A moment of stark reality is in order.

When Payne attends work one day, he earns as much as a minimum wage janitor is paid in an entire year. That means it would require the janitor to work hard for 365 years to match Payne’s one-year haul.

Nobody who sits and talks for a couple hours is worth 365 times as much a guy who breaks his back all day, so the rest of us have clean floors and toilets.

Time to raise the minimum wage. Among other blessings, the folks “down under” might stop looking down at us in wonder.

One thought on “Pains of poverty from slave pay are just ignored by politicians; Elite class uses phony arguments to fight $15 minimum wage”