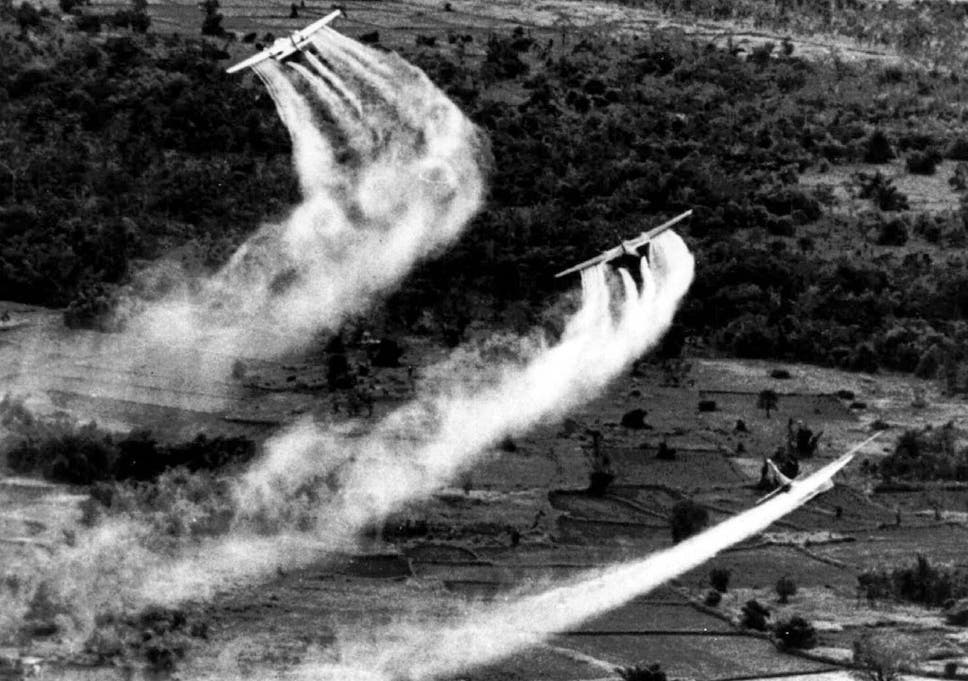 Some call it a marriage made in Hell.

Bayer and Monsanto combined last year, forming a single company that has produced everything from Heroin to Roundup™, and is currently best known for making farmers destroy seeds generated by their own crops.

Keeping farmers in their place is a hallmark of big chemical companies from Dow to DuPont, and Bayer/Monsanto is no exception. Their most recent victory was a Brazil Appeals Court decision that upheld the company’s right to regulate seeds, even those produced by farmers, not the company.

The court’s nine justices unanimously ruled last month that Brazilian farmers cannot save seeds for replanting if the seeds are harvested from Monsanto’s patented Roundup Ready™ soybeans, which are genetically engineered to withstand direct application of the firm’s Roundup herbicide.

In Brazil, Monsanto charges 2% royalties on the sale of its patented soybeans, a controversial industry mandate. The company also charges an additional royalty – 3% of farmers’ sales – when soybeans are planted from saved Roundup Ready seeds.

Monsanto requires United States buyers of its genetically modified seeds to sign special licensing contracts that prevent them from saving seeds. North American farmers, who violate those agreements, have been sued for patent infringement and compelled to pay tens of thousands of dollars in damages.

It seems you can’t beat this company in the courts, despite numerous attempts. Monsanto has won every intellectual property lawsuit that went to trial in the U.S. and Canada from 1997 to 2018

When President Donald Trump talks about intellectual property rights, the Monsanto control of the use of Roundup Ready™ seeds is one example. Other such property rights include brand name drugs and various other corporate patents.

These property rights’ provisions are included in the proposed Mexico/Canada/United States trade deal now in the House of Representatives, where a few honest brokers complain that blindly favoring patents guarantees extremely high prices for consumers.

Trump also wants these property rights enforced in China. That would mean the Chinese could also face the horror of spending $6,000 a year for a tiny pill of Bayer’s Xarelto, a commonly-used blood thinner drug that just had its patent extended in Europe to 2024. That’s expensive, but cheap when compared to drugs for Cystic Fibrosis and HIV that cost hundreds of thousands of dollars a year.*

The Chinese will not buy America’s corporate monopolistic practices. Instead, Trump is offering them more and more soybeans from our farms, mostly grown with Monsanto seeds and protected from insects by Monsanto Roundup™. To keep the farm industry happy he is also using our tax dollars to subsidize these farmers so they can sell cheaply to our greatest global competitor.

Because of the Trump-China Doctrine, which is nearly the same as every President since Richard Nixon, China continues to force America into being a colony in the true British Empire model.

Britain once ruled the world by forcing its colonies to produce raw materials – cotton in America, sugar in the Carribean, silk and rice in Asia, rum in Jamaica. In return, Britain’s factories turned those raw materials into manufactured goods that were sold back to their colonies, who had no production capacity.

A company like Monsanto is relatively immune to trade policy. As the world’s largest seller of seeds, together with Bayer, it has a long history of success, no matter what the political winds brought.

Bayer was founded in 1863. Everyone knows it invented aspirin, but it also sold Heroin in the early 1900s to cure coughing. During World War II, Bayer was part of the IG Farben consortium that produced Zyklon B for Nazi gas chambers.

IG Farben used slave labor in its factories in German concentration camps, including Monowitz (Auschwitz III). By 1943 about half of IG Farben’s 330,000 workforce was either slave labor or conscripts, including 30,000 Auschwitz prisoners.

In one study of an anesthetic, the company paid RM 170 ($68, or $994 today’s money) per person for the use of 150 female inmates of Auschwitz. A Bayer employee wrote to Rudolf Höss, the Auschwitz commandant:

“The transport of 150 women arrived in good condition. However, we were unable to obtain conclusive results because they died during the experiments. We would kindly request that you send us another group of women to the same number and at the same price.”

Monsanto began as a manufacturer of saccharine in 1901. During the 1940s, it first produced farm chemicals, including herbicide 2,4-D. Combined with another chemical, 2,4-D was used to manufacture the Vietnam War-era Agent Orange. Vietnam, as well as American veterans, have demanded the company pay compensation to victims of the defoliant.

Between 1961 and 1971, the United States military sprayed some 12 million gallons of the poison on more than 30,000 square miles of southern Vietnam. Dioxin, a highly toxic element of Agent Orange, has been linked to major health problems such as birth defects, cancers and other deadly diseases.

In 1976 the company introduced weed killer Roundup. More than 40,000 cancer victims or their families are now suing Monsanto, claiming exposure to the company’s line of Roundup herbicides caused their diseases.

The lawsuits allege that exposure to Monsanto’s herbicides led to plaintiffs developing non-Hodgkin lymphoma, and that while Monsanto knew about the cancer risks, it intentionally did not warn consumers.

Monsanto scientists in the 80s were first to genetically modify a plant cell, and the firm soon began buying other seed companies and initiated field trials of GM seeds.

Eventually, Monsanto developed soybean, corn, cotton and other crops, engineered to be tolerant of Roundup, and denied farmers the right to freely use seeds generated by their own crops on their own land.

This is a link to Bayer/Monsanto current products.

To give credit where it’s due, Friends of the Earth first dubbed the merger a “marriage made in hell”, and said it would simply switch its protests to Bayer so long as it continues Monsanto’s practices.

* Ten most expensive U.S. drugs based on length of therapy: