It was a morning air flight last month in Philadelphia, and I was moving through security at the TSA Pre® line, when the alarm sounded. Pulled aside, I was told to send my wallet and glasses through a conveyor. I couldn’t reach the belt from where I stood, so I asked the TSA agent nearby where to place the items.

Shut up and do what you’re told, he snarled.

Welcome to the world of government arrogance, power and rudeness. 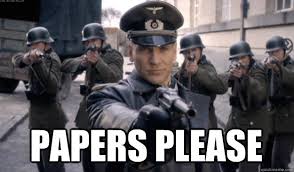 I wondered how I would be treated if I were not an American citizen, who never missed a day of work in 48 years, was never arrested, paid maximum FICA taxes every year, registered for the draft, and even once worked for our United States Information Agency to spread good news about America around the globe?

Life isn’t fair. And today, neither are the rules for citizenship, hassle-free travel, paying taxes or getting a job.

Take the undocumented stranger, paperless person, or whatever new-speak you prefer.

Any foreigner, younger than 21, can claim one of their parents is abusive, and they are given access to a U.S. work visa, driver’s license, even a real Social Security card. They can fly anywhere in the USA, work where they want, and even vote in school board elections in places in California.

If you are under 18 you can claim to be a child (unlike our soldiers, who are men at 17 when they join). That designation means you cannot be sent back across the border and must be released into the United States after 20 days, and be assigned to a person (not necessarily a parent) living in the United States.

If you bring a child with you and claim to be their parent, both of you are released into any one of various cities around the country with free transport provided by bus or plane.

And if you just lie, and don’t attend your hearing years away, the result of this deception is that you get a chance to join the underground economy – meaning no payroll and no income taxes.

Someone who doesn’t pay taxes always costs capitalist employers less than someone who does. Levies like FICA – 7.65% for the employee –  are matched by your employer. If both of you don’t pay FICA, your boss saves 15.3% off your wages. This under-the-table hiring is one major reason that Social Security is fiscally underfunded.

In America, today, what’s good for business is promoted as good for everyone. And nothing is better for generating more profits for owners than lower wages for workers.

Which brings me to Three–card Monte – also called Find the Lady and Three-card Trick – a con game to scam rubes of their money.

The three cards in the real immigration policy are:

The media always picks the #3 card, and tries to convince the rest of us we are all winners.

Want proof of this conspiracy?

Both houses of Congress decided in 2012 that requiring employers to check the Social Security (SS) numbers of their workers, versus the real SS database was just an imposition on business that prevented scooping up as much profit as possible. The Social Security Administration (SSA) had been making these comparisons to W-2 forms since 1993, and notifying problems by mail.

At the time the letters were portrayed as unnecessary regulation. Indeed, how many fake social security numbers could possibly be in play – a hundred employers, maybe as many as a thousand? That’s no big deal in an economy that employs 129 million.

In March, Donald Trump and his new Health and Human Services (HHS) Secretary, Alex Azar, announced that the first warning letters were mailed.

Some 570,000 employers were informed of W-2 and Social Security information discrepancies. If each company had 20 workers affected, that’s more than 11 million jobs.

The GOP and most Democrats were silent, realizing that voters believed fair employment rules made sense and they wouldn’t agree with protest of a legal procedure.

But the wide-eyed, well-meaning and often fooled – weren’t happy.  Some Democratic lawmakers wrote a letter to the SSA last month calling on SSA to stop reporting the errors. Even my old friend, Rep. Dwight Evans, fell for the no-enforcement scam.

But that is the tip of the iceberg. At least these workers paid FICA, even though it didn’t go into any real worker account.

What about the millions who work under the table in construction, hospitality and carrying money and orders to and from lobbyists and Congress? How is the government cracking down on that law-breaking?

In the 12 months ending this March, about 112,000 people were prosecuted for illegal entry or re-entry.

And since many of them were working – legally or with fake papers – how many employers faced prosecution for violating labor laws?

If you wonder who is pushing for more legal and illegal immigration, it’s not like the old days when they brought over the Irish or Polish by the millions to do hard work at low wages with no unions.

Today’s shakers of policy, including immigration, are smooth-talking, lewdly-rich, pretenders of purity, who use a little of their dough in a recipe of financial control, sprinkled with doses of fake concern for humanity.

Enter the Koch Brothers, who together are almost as rich as Jeffrey Preston Bezos.

These big corporate donors to the Republican establishment ($889 million in 2016 alone), have now praised House Democrats’ mass amnesty effort through organizations the Kochs control, including the Libre Initiative and Americans for Prosperity. In a statement praising a recent House vote, the Kochs contended:

Today’s vote to provide a path to permanent legal status for the Dreamers and TPS recipients is a positive step,” Libre Initiative president Daniel Garza said.

The Dreamers know no other home than the United States. Every day they contribute to our economy and communities, but there is one big thing holding them back: the uncertainty around their status. Until and unless the law changes – giving them a way to remain legally in the United States – they remain limited in contributing to America’s success.

We are hopeful that this vote sets the stage for discussions among leaders in both parties, in both the House and Senate. Given the extraordinary level of support for the Dreamers among the American people, this can’t be the end of the discussion. It has to be a new beginning – the start of a discussion about how to move legislation through the House and Senate and have it signed by the president. We are thankful to lawmakers who support this important effort.

The Kochs have indicated they will no longer support Republicans who don’t follow their philosophy of open borders, privatizing Social Security and Medicare, ending all inheritance taxes, replacing the progressive income tax with a sales tax, and halting tariffs imposed by the United States. Democrats who buy in, get the payout.

In a reversal of prior contributions the Kochs (sons of John Birch Society founder Fred Koch) say they will now also fund Democrats who support their philosophy of privatization at all costs.

The next time a candidate promises, don’t look at their party label, or blindly trust what they say. Remember politicians don’t necessarily put all their cards on the table, and what you see is not always what you get.