Congress shall make no law respecting an establishment of religion, or prohibiting the free exercise thereof; or abridging the freedom of speech, or of the press; or the right of the people peaceably to assemble, and to petition the Government for a redress of grievances. – United States Constitution, First Amendment

In other words, our government can’t tell you whom or what to worship or how to do it, and by the same token, it can’t keep you from praying or behaving religiously.

This should be called the acknowledgement amendment. It includes clauses to allow the public and the government to fully recognize there are religions and all worshipers are permitted to follow their beliefs. 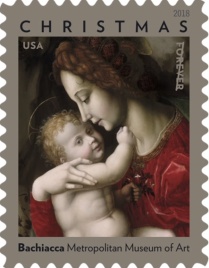 That means under the Constitution, the United States Postal Service (USPS) may legally print postage stamps complete with Christ Child, Madonna and the word Christmas. The holiday named after Christ is so acknowledged by an arm of the government. See right:

If the government is allowed to use religious figures on stamps, along with the word Christmas, that means the people can do the same. Freedom to acknowledge religion is supposed to be our guaranteed right.

Don’t tell that to the frustrated and harried owners of the Kansas City Chiefs. Clark and Tavia Hunt thought it would be a grand idea to create their own postage stamps to use for their family Christmas cards. The USPS has commissioned companies to do that for you, including Stamps.com and Zazzle.

This philatelic saga began when the Hunts had the family photo (left) taken in Russia with wife and children holding a Kansas City Chiefs poster. We all know the NFL needs any good publicity it can scrounge, including folks wearing funny hats and looking quite wealthy. (Clark, worth $2 billion, is the son of Lamar Hunt and the grandson of oil tycoon H. L. Hunt.)

After endless, “please hold for next foreign consultant” and “push 1 for English”, Tavia Hunt had her lawyers send a letter to USPS last week, demanding an explanation for their stupid policy – adopted in early 2017. That rule forbids “all religious content” being used on U.S. postal stamps manufactured privately through third-party printers authorized to create customized stamps.

The policy says it’s okay for the post office to recognize there are religions with postage stamps, but even rich people are not allowed the same (God-given?) right.

The confrontation unfolded this way. On November 28 Tavia placed an order for custom stamps made from that picture of her family taken in front of the minarets of St. Basil’s Cathedral in Red Square, holding a flag, reading “Chief’s Kingdom” in the team’s colors.

As part of the program of state atheism, the cathedral – built in 1561 by Ivan the Terrible – was confiscated from the Russian Orthodox community as part of the Soviet Union’s anti-theist campaigns. It has operated as a division of the State Historical Museum since 1928. It’s current name is Pokrovsky Cathedral (Покро́вский собо́р).

Tavia used Zazzle, with fulfillment through stamps.com. A few days later she learned her family image had been rejected because of its “religious” content. She objected on grounds of religious freedom, and Zazzle approved the order.

When Tavia tried to track her shipment online, she learned the order was cancelled again. Zazzle said she should contact Stamps.com, because they are responsible for all content decisions.

Stamps.com initially claimed the rejection had nothing to do with Hunt’s religious devotion or the image of St. Basil’s. It said the problem was illegal use of the Kansas City Chiefs’ logo. To prove she had the rights to the logo, Hunt signed an affidavit saying the Hunts owned it.

Now that the logo was legal, Zazzle then said he rejection was “due to the prominence of St. Basil’s Cathedral on the background.” The order would be approved if “the image is cropped so that the cathedral is not obvious,” the company explained.

The Hunts and the vendors went back and forth on how to get around the USPS religious content rule, including cropping the image to make the cathedral “not obvious.”

By the time Stamps.com eventually agreed to a permissible version, Zazzle stopped offering any customized stamps “due to the onerous USPS regulations,” according to Tavia’s lawyers.

It could be worse. While citizens here are enjoying some small portion of “religious freedom”, our inscrutable chief trading partner is on a tear against even celebrating Christmas.

The British Guardian newspaper reports China is cracking down on Christmas.

In the northern city of Langfang in Hebei province, city officials ordered all Christmas decorations to be cleared and forbade shops from selling Christmas-themed goods. Officials said the measure was aimed at “maintaining stability” and controlling street hawkers.

A teacher in Huangshan in Anhui province issued a reminder on Christmas Eve to follow a recent notice from the propaganda department not to attend Christmas parties, post related messages on the popular messaging apps WeChat or QQ, or give teachers “peace apples”, a tradition in China. The term for Christmas Eve, pinganye, or peaceful night, is similar to that of the world “apple”.

The notices come amid a broader crackdown on underground churches, according to The Guardian.. Last week, police raided a children’s Bible class in Guangzhou, and earlier this month, authorities shut down the Early Rain Covenant Church in Chengdu, arresting 100 members.

In September, China closed one of the largest underground churches, Beijing’s Zion Church.