This past Friday night marked the 80th anniversary of the 1938 Kristallnacht pogrom, when so-called demonstrators murdered 100 German Jews. burned 200 synagogues to the ground, and rounded up 30,000 Jewish men to slave in concentration camps. 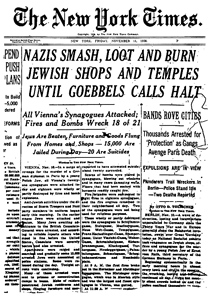 Immediately, the 566,000 Jews living in Germany and the millions in Poland, Romania and Russia, fearing future war and oppression, began planning to leave their endangered nations and emigrate to the United States.

No matter what the Nazis did between 1933 and 1945, the United States refused to increase these quotas.

Worst of all, our State Department viewed these as limits, not goals, and didn’t try to fill them. Between 1933 and 1941, some 118,000 German quota slots – that could have been used – went unfilled.

The only major effort to pass a law to aid refugees came in 1939, when Senator Robert Wagner (D-NY) and Congresswoman Edith Rogers (R-MA) introduced a bill in both houses of Congress to allow 20,000 German refugee children under 14 into the country over the next two years, outside of the quotas. The proposal died in committee.

When FDR asked his closest Jewish adviser, Samuel Rosenman – of the American Jewish Committee – if more Jewish refugees should be allowed to enter the U.S. because of Kristallnacht, Rosenman opposed the move because ‘it would create a Jewish problem in the US.”

The American Jewish Committee wrote in a position paper after Kristallnacht:

(Refugee resettlement) is helping to intensify the Jewish problem here. Giving work to Jewish refugees, while so many Americans are out of work, has naturally made bad feelings. As heartless as it may seem, future efforts should be directed toward sending Jewish refugees to other countries, instead of bringing them here.

Even when atrocities of the Holocaust were reported by American newspapers, Rosenman told FDR not to meet with what Rosenman referred to as “the medieval horde” of 400 rabbis gathered outside the White House.

In the final phase of the Holocaust, Rosenman tried to prevent the creation of the War Refugee Board, which was intended to save Jewish refugees from genocide.

Another group, the General Jewish Council, insisted on maintaining radio silence following Kristallnacht. Comprised of leaders from the so-called “defense” organizations, the council issued these instructions in the pogrom’s aftermath:

There should be no parades, public demonstrations, or protests by Jews.

The council also told American Jews not to advocate for admitting more Jewish refugees into the country.

Medoff summed up the weakness of American opposition and acceptance of doom for the Jews before the war:

There were many verbal condemnations, but no economic sanctions against Nazi Germany, no severing of diplomatic relations, no easing of immigration quotas, not even a complete opening of the gates to the Jews’ own ancient homeland.

The Free World’s muted reaction to the Kristallnacht pogrom foreshadowed the terrible silence with which it would greet the Nazis’ Final Solution.

Few American leaders — Jewish or otherwise — were willing to fight for increased refugee resettlement. There were, however, thousands of Americans willing to take in another kind of refugee from Europe: those who walked on four legs.

“Ironically, when ‘Pets’ magazine launched a campaign to have Americans take in purebred British puppies so they would not be harmed by German bombing raids, the magazine was flooded with several thousand offers of haven for the dogs,” wrote Medoff.

2 thoughts on “The caravan of millions of European refugees fleeing torture, slavery and murder that never arrived in America”