Who would expect this from the leader of a pro-business political party:

Pfizer & others should be ashamed that they have raised drug prices for no reason. They are merely taking advantage of the poor & others unable to defend themselves, while at the same time giving bargain basement prices to other countries in Europe & elsewhere. We will respond! – Donald Trump,  10:08 AM – 9 Jul 2018

It’s easy to agree that there are much cheaper drug prices in other countries. Trump didn’t mention that we now see medicine manufactured in China, as well as India – just to save a few pennies on a bottle of drugs that costs hundreds, or even thousands of dollars here. 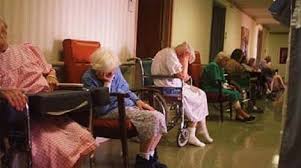 Yet, the charge that drug firms take advantage of the weak and powerless would seem unfair, until we examine what appears to be callous behavior by drug execs.

The following tale of so-called success in reducing drug use among the elderly shows how drug firms can evade, avoid and continue to make billions from seniors’ prescriptions.

The federal government’s Centers for Medicare & Medicaid Services (CMS) has recently ended its campaign for some facilities to reduce the improper use of anti-psychotic drugs for long-stay residents in nursing homes. The campaign was called the National Partnership to Improve Dementia Care in Nursing Homes.

CMS only urges them to “continue their efforts and maintain their success.” If you have ever entered a nursing home and saw residents staring ahead aimlessly, the toll of these anti-psycho drugs is obvious.

The improvement in reducing anti-psycho drug use seems like good news. Then you find out what really happened.

A study in the Journal of the American Medical Association Internal Medicine debunks claims that the National Partnership achieved its goals, because researchers found a lot of drug substitution.  Instead of anti psychotic drugs, residents were given other drugs, particularly mood stabilizers that are not captured in CMS assessment data.

Reviewers based their analysis on 637,426 residents (a 20% sample of nursing home residents using traditional Medicare between January 1, 2009 and December 31, 2014) and the Part D drugs they received.

Even the media in airports noticed.

CNN reported in October that Avanir, who makes Nuedexta, targeted advertising at nursing facilities that had high rates of anti psychotic drug use.

Nuedexta is only approved by the Food and Drug Administration to treat pseudobulbar affect, or PBS (uncontrollable laughing or crying), a condition affecting less than 1% of the population. But it seems – from its widespread use – to be replacing antidepressants in nursing homes.

A check of prices shows WalMart charging $13,056 a year for one Nuedexta prescription, which just might, possibly explain why, since 2012, “more than half of all Nuedexta pills have gone to long-term care facilities” and “the number of pills rose to roughly 1.4 million in 2016, a jump of nearly 400% in just four years,” according to the AMA.

For more info on this expensive drug and what FDA has approved for its use, see their website: https://www.nuedexta.com/starting-nuedexta