Foreign agricultural workers temporarily admitted into the United States on H-2A visas are exempt from U.S. Social Security and Medicare taxes on compensation paid to them for services performed in connection with the H-2A visa. This is true whether they are resident aliens or nonresident aliens.

In addition, compensation paid to H-2A agricultural workers for services performed in connection with the H-2A visa is not considered to be “wages” for purposes of federal income tax withholding, and thus is not subject to mandatory withholding of U.S. federal income tax…Internal Revenue Service

More than 160,000 new temporary (up to three years extension allowed) workers were issued H-2A Visas last year, with about half of those going to Georgia, North Carolina, Florida, Washington and California. Their employers did not pay the company share (6.2%) for FICA (Social Security) or Medicare tax (1.45%). Their bosses didn’t even withhold income taxes, making net pay almost the same same as gross pay.

FICA tax is 12.4% for combined employee/employer. Medicare is 2.9%. That means a U.S. citizen takes home some 15% less than a foreign visa holder. Is it any wonder that farmers can’t “find” Americans to do these jobs? It just makes financial sense to use visas to avoid taxes for both farmer and worker.

Not collecting taxes is bad enough, but the H-2A program is also rift with mistreatment of  temporary workers.

The U.S. Department of Labor says the average family’s total income from farm workers is $17,500 to $19,999, which has not increased from 2008-09, primarily because of our stagnant national minimum wage. The federal poverty level for a family of three is $19,790, and 25% of farm workers fell into that category.

Current law orders that if you are a foreign worker with an H-2A Visa, you are only authorized to work for the grower who applied for your visa. Leaving that grower and/or association and accepting work with another grower is not permitted by the visa. You go back home if you are caught.

How many must endure terrible working conditions, because they can’t change jobs?

Some abuse of visa-holders is caused by piece-based compensation, which allows loopholes to exploit workers.

For example, the piece rate for orange juice in Florida is 85 cents per 90-pound box of oranges. Average worker picks eight boxes per hour, so during an eight-hour workday, a picker will produce 64 boxes of oranges (5,760 pounds). Using the 85 cents piece rate, a worker would receive only $6.80 an hour, which is less than the minimum wage

To compensate for this shortfall, as of 1966, federal law requires employers on large farms to pay the minimum wage, even if a worker doesn’t earn it based on their piece rate. 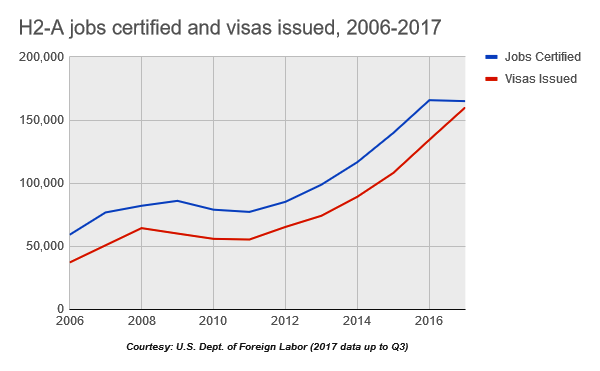 However, about one-third of our agricultural workers toil on small farms, and they are not subject to federal laws on minimum wage. If a farm worker is hired through crew leaders or farm labor contractors – about half of all workers – then their growers can avoid state and federal-level employment laws, including minimum wage.

Farm workers, in most cases, do not receive overtime pay, nor do they get sick time or maternity leave.

It all sounds like the South before Lincoln freed the slaves.

Unfortunately, allowing employers to avoid taxes, abuse employees and escape work rules, also creates an unfair competition between the citizen and the H-2A visa holder. The only party benefiting from this is the employer, who will use the “system” to increase profits for investors and maintain power over the labor class.

3 thoughts on “H-2A workers don’t pay Social Security (FICA) tax, neither do the millionaires who are exploiting them”