During his Saturday campaign rally in Washington, Michigan, the “Hire America” President Donald Trump said that the U.S.A. unemployment numbers were so good that it was now possible to allow many more guest workers into the country to work the fields and take millions of other jobs. The audience gasped and then was silent. 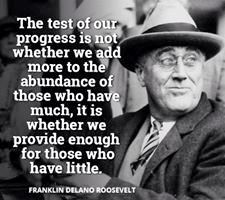 It reminded voters, some who vigorously supported Barack Obama, of how that progressive candidate promised to reform the finance cartel, but then appointed nearly everyone from Wall Street to the Cabinet and highest councils.

And many may have recalled the first George Bush’s lip-reading campaign promise of “no new taxes.”

Or FDR’s pledge in the 1940 election to not send “our boys” into a European War.

I always thought it was a choice of two scenarios: some Presidents change their mind and some lie. But now there is the third possibility – that the President doesn’t have a clue about what he is saying. Mr. Trump, are you listening carefully?

The H-2Bs don’t work on farms, a fact our President should be told by his cadre of consultants. The 2B foreigners do work at all sorts of joints, both Trumpian and grandiose, whose profit is enhanced by often hapless aliens paid dirt wages and threatened with deportation if they don’t comply to demands of all sorts.

Trump was applauded when he said the H-2B workers were just “guests” and would do a job and go home. Unfortunately, that’s a description of H-2A agricultural workers. The H-2B program allows a year’s employment, then renewal for up to three years. So much for going right home.

The President’s GOP buddies know that these low-wage foreign Visa workers increase profits and that’s why this H-2B program has been expanding under Trump.

A government report explains why the merry money makers want these visas:

Now, let’s look at the claim that unemployment numbers are “so good” that we need more alien workers in Michigan, or anywhere else in the U.S.

Charles Ballard, an economist at Michigan State University, said that Trump boasted an 8.7% unemployment rate for African-Americans in Detroit, but that should be doubled or more.

The 8.7% only includes those actively looking for a job.  It doesn’t count people who’ve given up looking, and those who have a part-time job, but want to be working full-time. Those two groups are included in another rate, an expanded unemployment rate, which is available for public viewing on the 31st of February with a FISA warrant.

Some 26 million Americans work part-time, many because full-time work is unavailable. Some 37% of all folks eligible to work, have given up looking for a job or gone on disability. They are not counted in Trump’s unemployment rate, and that percentage of the workforce is near an all-time high.

Ignored as usual are the tens of millions working for lousy wages in terrible jobs, folks who need every dollar earned just to buy food the current week. Pitting the poor to compete for jobs against a horde of imported workers is the major cause of our stagnant wages.

Until we have rebuilt our American workforce with real job opportunities and decent pay, President Trump should concentrate on Making America’s People Great, and forget increasing the extreme wealth of an elite class that boasts gold bathroom faucets, polished by foreign paupers with bowed heads.