American universities produce the best software engineers, IT managers and programmers  in the world, but many can’t find a job or have taken pay cuts in recent years.

India’s Navin Kabra, 20+ years of being a software engineer at various levels, explains why in a comment on Quora:

Because there are too many software engineers in India, and not enough in the US.

Because India is churning out 1 million new engineers every year, whereas the industry requires only about 200,000 of them. 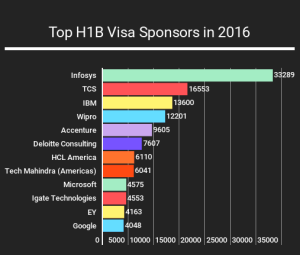 Kahra was answering this question:

Which brings me to the one bright hope in recent years that the abominable H-1B Visa system would be reformed. In January California Congressman Zoe Lofgren introduced the High-Skilled Integrity and Fairness Act of 2017, H.R. 670, which gives priority for  market-based allocation of visas to companies willing to pay 200% of a wage calculated by survey.

The bill also eliminates the category of lowest pay, and raises the salary level at which H-1B dependent employer are exempt from non-displacement and recruitment attestation requirements to greater than $130,000.

The $130,000 is more than double of the current H1B minimum wage of $60,000, which was established in 1989 and since then has deliberately remained unchanged. Lofgren explained:

My legislation refocuses the H-1B program to its original intent – to seek out and find the best and brightest from around the world, and to supplement the US workforce with talented, highly paid, and highly skilled workers, who help create jobs here in America, not replace them.

H.R. 670 was introduced Jan. 24 and was almost immediately buried by Congressional leadership.

The Hindustan Times rejoiced on January 31, just a week after the bill’s introduction with this headline:

The H1-B reform bill calls for more than doubling the minimum salary of H-1B Vjsa holders to $130,000, among other things.

Well, at least they noticed in India that American jobs won’t be saved from lower wage foreign workers.

This year, the Department for Professional Employees has estimated how these workers continue to increase in many highly paid occupations:

The highest concentration of guest workers in STEM occupations was among medical scientists and life scientists where guest workers were 28.5 percent of the workforce in 2016. All of these guest workers are employed under a variety of skilled worker visas, including the B, H-1B, L-1, L-2, O, and OPT.

The H-1B Visa program almost entirely benefits large firms like Google, Facebook and their ilk. Paperwork requirements are fierce and smaller companies can not afford the effort. Big companies set up departments and systems to make firing Americans and replacing them – easy and profitable! Or, they contract with firms like Infosys.

Write your not-too-astute Congressperson and ask status of H.R. 670, and don’t be surprised if you get the reply: “What’s that?”

Tuesday, Next Week: How India lobbies our government to protect the corrupt H-1B Visa program