CNN reported yesterday that the FBI used the “Russian Dossier” in its application for warrant from the FISA court in order to monitor former Trump advisor Carter Page.

“U.S. officials tell CNN that last year the FBI used a dossier of allegations of Russian ties to Donald Trump’s campaign as part of the justification to get approval to secretly monitor Trump associate Carter Page,” CNN reported. “Now those sources say that FBI Director James Comey has cited the dossier in some of his briefings to Congress in recent weeks as one of the sources of information that the bureau used to bolster its investigation.”

Someone was watching an old spy movie last year, when they created a “Russian Dossier” (RUDO) on then candidate President Donald Trump.

Remember in WW2, when the spy took out his tiny camera,  shot page after page of documents, and then developed the film in secret, creating negatives, then using an enlarger to make prints. It took six trays of chemicals, and that was just for black and white. Using a light bulb fixture behind you was preferred for illumination.

Enhanced images of the PDFs obtained from the Buzzfeed site, which published the RUDO, also known as the Steele Dossier, indicate the same back light shadow on all the dossier pages. This shadow was not seen on the original documents, but by converting to JPG format and auto correcting, the same marking appeared on every page, meaning they were all photographed in an amateur manner at the same.

Apparently, the spymaster didn’t know that quality copy machines were in common use by spies as far back as the 1980s, or perhaps the odd sizes, poor quality of the pages and angles were meant to impress the viewer that this was something from a secret source. However, the documents were created and dated last year. Portable scanner/copy machines today cost less than $50.

The dossier – first referred to publicly by CNN – was not available on their website, but viewers were conveniently told it was posted on Buzzfeed.com (still available by PDF and transcript by going to this link). Warning: Mature content and disgusting descriptions.

Buzzfeed found that dossier’s errors emerged almost immediately – yet the site still offers it online as late as today, complete with idiocies like yellow highlighting and many last names in All Caps.

Aleksej Gubarev, the CEO of web company XBT, called the publication of the document “reckless and irresponsible.”

The suit, which was filed in Florida against BuzzFeed and editor-in-chief Ben Smith, said that allegations in the document regarding Gubarev are untrue.

“We have redacted Mr. Gubarev’s name from the published dossier, and apologize for including it,” Matt Mittenthal, spokesman for BuzzFeed News, said in a statement.

Locations were misspelled. The names of a huge bank and Russian officials were spelled wrong. Meetings were described in foreign countries the participants never visited.

If it is a baloney document, why even mention it? Conclusions by the BBC offer an alarming picture:

The controversial, largely discredited 35-page dossier on President Donald Trump compiled by a former British intelligence officer served as a “road map” for the FBI’s investigation into claims of coordination between Moscow and members of Trump’s presidential campaign.

“The road map for the FBI investigation (of Trump and associates), publicly acknowledged now for the first time, comes from Christopher Steele, once of Britain’s secret intelligence service MI6,” the BBC’s Paul Wood reported.

Wood said until now “no single piece of evidence has been made public proving that the Trump campaign joined with Russia to steal the US presidency – nothing.” But, “the FBI Director, James Comey, told a hushed committee room in Congress last week that this is precisely what his agents are investigating.”

I recently watched even Rep. Adam Schiff (D-Hollywood) publicly refer to the dossier as he alleged Russian/Trump meddling in the 2016 presidential election.

The history of this dossier is one of intrigue. It was first funded by a GOP moneybags, who wanted Trump to lose the nomination. When Trump won that, Democrat funders started to pay Steele to stop Trump in the general election. Finally, the FBI agreed to pay Steele to continue his dossier, but apparently broke the agreement. (Maybe, they don’t like to pay for junk intelligence.)

Communications between the bureau and the former spy were interrupted as Steele’s now-famous dossier became the subject of news stories, congressional inquiries and presidential denials, according to the people familiar with the arrangement, who spoke on the condition of anonymity because they were not authorized to discuss the matter.

Even Mike Morell, who served as deputy director of the Central Intelligence Agency and twice as acting director, has questioned the dossier’s credibility. He currently works at the Hillary Clinton-tied Beacon Global Strategies LLC. Morell mused:

“I had two questions when I first read it. One was, How did Chris talk to these sources? I have subsequently learned that he used intermediaries.”

And then I asked myself, why did these guys provide this information; what was their motivation? And I subsequently learned that he paid them. That the intermediaries paid the sources and the intermediaries got the money from Chris (Steele). And that kind of worries me a little bit because if you’re paying somebody, particularly former FSB officers, they are going to tell you truth and innuendo and rumor, and they’re going to call you up and say, “Hey, let’s have another meeting, I have more information for you,” because they want to get paid some more.

The F.S.B. is the Federal Security Service of the Russian Federation. Republican fat cats, then Democrats, and finally, the FBI were mesmerized by a dossier sourced entirely by Russian spies. Indirectly, American politicians were paying Russians for information on Americans, which is collusion with foreign agents. Something for the FBI to examine?

Morell was in line to become CIA director if Clinton won. He said he had seen no evidence that Trump associates cooperated with Russians.

Wikipedia notes that on Nov. 18, last year, Sir Andrew Wood, British ambassador to Moscow from 1995 to 2000, met with U.S. Senator John McCain (R-AZ) in Canada, and told him about the existence of the dossier. In early December, 2017, McCain took a break from planning WWIII, and obtained a copy of the dossier from David J. Kramer, a former U.S. State Department official, who worked at Arizona State University. On December 9 McCain met personally with FBI Director James Comey to pass on the dossier. Of course, we now know that the FBI had the dossier months earlier and had dismissed it.

If Christopher Steele actually wrote this dossier, it doesn’t say much for the British educational system. 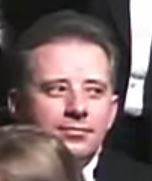 Steele was born in Aden, Federation of South Arabia, on June 24, 1964, and he attended Girton College, Cambridge and wrote for the oldest of Cambridge University’s main student newspapers, Varsity. In the Easter term of 1986, Steele was President of The Cambridge Union. He was known as a “confirmed Socialist”, and graduated with a degree in Social and Political Sciences in 1986.

He was recruited by MI6 directly following his graduation from Cambridge, and worked in London at the Foreign and Commonwealth Office (FCO) from 1987 to 1989. From 1990 to 1992, Steele worked under diplomatic cover as an MI6 agent in Moscow, 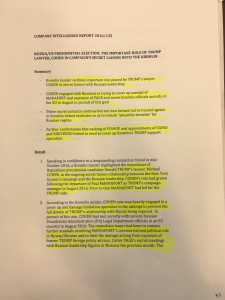 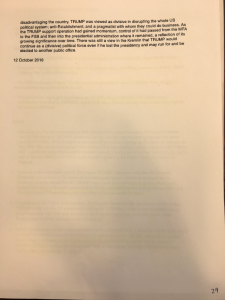 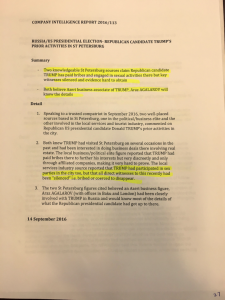 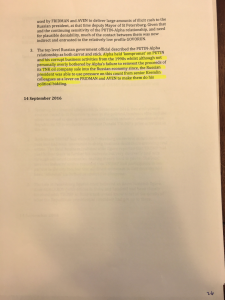 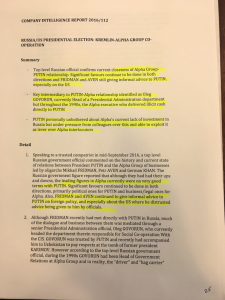 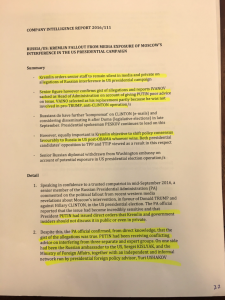 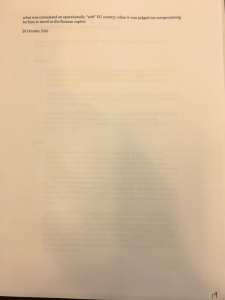 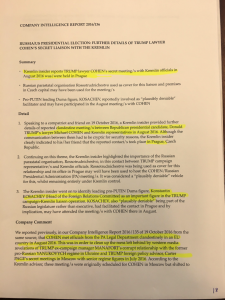 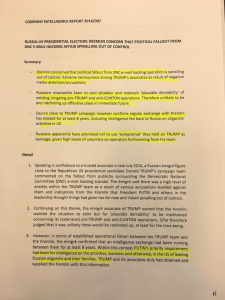