General Francis Marion, known as “The Swamp Fox,” was a Revolutionary officer in the South Carolina Second Regiment, who also led a band of irregular fighters in the back and low-country swamps of South Carolina, fighting the British troops under Lord Cornwallis. He is generally known as the Father of Guerilla Warfare, and is recognized as such at various U.S. War Colleges.

When politicians talk about “draining the swamp”, it immediately brings Marion’s exploits to mind, recalling his determination to struggle in the swamps for our new country, and never compromising – despite immense odds against his small units fighting a disciplined British establishment army.

If you were planning to fight all out – in the Swamp Fox tradition – for free trade, to end internationalism that puts America last, and to bring back jobs to America lost by globalist treaties, would you hire a member of the Trilateral Commission to “coordinate the Administration’s international economic policy and integrate it with national security and foreign policy?”

The Trilateral Commission’s principal goal is to set up three regions of the world without economic borders – North America, Europe and Asia. The big dream of this secretive group is to have a world government run by technocrats – stooges of the big bankers and big money everywhere.

Someone from that group should be the last person for President Donald Trump to pick to “be the President’s representative and lead U.S. negotiator (“Sherpa”) for the annual G-7, G-20, and APEC Summits.”

Trump is too smart, too principled, too honest to make that mistake.

The quotes above are from a White House press release announcing the appointment of Kenneth I. Juster as Deputy Assistant to the President for International Economic Affairs. He will also sit on the National Security Council. Juster was appointed by National Security Advisor Michael “Mike” T. Flynn, formerly a U.S. Army lieutenant general and Director of the Defense intelligence Agency.

This “Flynn Flam” gets worse.

His first exposure to the Trilateral Commission was early in his career, during James Carter’s anemic reign. Juster worked a summer on the staff of the National Security Council under Zbigniew Kazimierz Brzezinski, co-founder with Henry Kissinger and David Rockefeller of the Trilateral cabal.

Juster has been a Partner and Managing Director at the global investment firm Warburg Pincus (2010-2017), Executive Vice President of salesforce.com (2005-2010), and Senior Partner at the law firm Arnold & Porter (1981-1989, 1993-2001).  Juster has also served as Chairman of the Advisory Committee of Harvard’s Weatherhead Center for International Affairs, Vice Chairman of the Board of the Asia Foundation, and a member of the Trilateral Commission, the Council on Foreign Relations, and the American Academy of Diplomacy.

If you are looking to drain swamps, where better to start than the Trilateral Commission? And if you’re into having your organization continue to run the economic world, what better agent to get in the White House than the Deputy Assistant to the President for International Economic Affairs?

Trump still has time in office to purge alligators like Juster from his government, and if he does he may even be praised for “draining the swamp.”

But with some of his recent appointments, it is doubtful that he will be remembered in the same class as Francis Marion, a man of diminutive stature, who has always been a national hero. 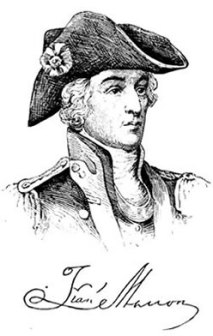 Second only to George Washington in popularity in the century following the Revolutionary War, Marion lent his name to 29 cities and 17 counties across America, a four-year university, a National Forest, and countless babies.

He is known for one of the only two biographies by Parson M.L. Weems (the other being General Washington), the William Cullen Bryant epic poem “Song of Marion’s Men,” a feature length motion picture The Patriot, featuring Mel Gibson, a Wonderful World of Disney series in 1959-60 called “The Swamp Fox,” starring Leslie Nielsen and hosted by Walt Disney, and a small park on Capitol Hill in the city he helped to create.

It’s still very early, but so far, Trump is no “Swamp Fox.”