Democrats crying over the temporary ban on immigration from seven terrorist sanctuaries might feel less entitled to a supposed high ground, when they look at the history of discrimination by the most liberal of our leaders.

William Shirer first exposed the Nazis’ systematic execution of individuals with physical or mental disabilities in the pages of Life magazine and Reader’s Digest in early 1941 – a program that would serve as a prototype for the the Holocaust. 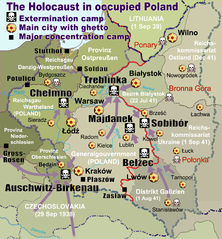 In June 1942, word reached this country that the Nazis were planning to kill all the European Jews. A report smuggled from Poland to London described in detail the killing centers at Chelmno, Poland and use of gas vans. Estimates were that 700,000 people had already been killed.

Between 1933 and 1945 – during the presidency of Franklin D. Roosevelt – only 11,000 Jews were permitted on average each year to enter the United States. That number was just 10% of those allowed under law, even though many hundreds of thousands were fleeing the Nazi hate machine..

For example, in 1939 the United States refused to allow 20,000 Jewish children to enter as refugees. The wife of the U.S. Commissioner of Immigration explained why at a cocktail party:

Finally, too little too late, in January 1944, (Jewish) Secretary of the Treasury Henry Morgenthau, gave Roosevelt a “Report to the Secretary on the Acquiescence of this Government in the Murder of the Jews.” Roosevelt then created the War Refugee Board, which, in turn, set up refugee camps in Italy, North Africa, and the United States. By this time about half the Jews in the world had been murdered.

The full text of the report is available here.

Dr. Rafael Medoff, author of 16 books on the Holocaust, has examined Roosevelt’s lack of principles:

Roosevelt went to considerable lengths to avoid offending the Nazis during the early years. For example, he asked his ambassador in Berlin, William Dodd, to pressure Dodd’s Jewish acquaintances in Chicago to cancel plans, in 1934, for a public mock trial of Hitler. In 1938, FDR made Secretary of the Interior Harold Ickes remove references to Hitler and Nazism from a speech Ickes planned to give about the suffering of Jews in Europe.

Another example of the administration’s approach occurred after German and Vichy French officials complained to Washington in late 1940 that US journalist Varian Fry was smuggling Jewish refugees out of France, Medoff explained, then adding:

Secretary of State Cordell Hull warned Fry to stop “evading the laws of countries with which the United States maintains friendly relations.” When Fry ignored the warning, the administration refused to renew Fry’s passport, forcing him to leave France and end his rescue mission.

One could say that the sabotage of Fry’s rescue work, like the US silence regarding the euthanasia program, in some ways foreshadowed the Roosevelt administration’s response to the Holocaust itself.

While last night’s marchers have demonstrated against alleged unfairness to some terrorist-infested nations, do they know the decades-long travel policies of nearly all the Muslim countries they are defending?

The nations affected by President Donald Trump’s temporary travel ban include: Iran, Iraq, Syria, Sudan, Libya, Yemen and Somalia. Let’s take them one by one.

Will the screaming, crying and whining demonstrators decide it is also now time to march against the 19 nations that refuse to allow Israeli citizens (Arab or Jew) into their countries?  Probably not, because for them, discrimination is only in the eyes of the beholder.

We must tighten loopholes in the Visa Waiver prgm, ensure passports can’t be faked & stop terrorists who want to exploit the system.
— Chuck Schumer (@SenSchumer) November 19, 2015

2 thoughts on “Democrats and human rights – why not cry for Jewish victims of Nazis ignored by Roosevelt?”