Are most American Blacks struggling to someday be as successful as the average White?

If you watch the mainstream media, listen to college professors or pay attention to politicians, you might conclude that Blacks in America are in deep trouble.

The most common fake news is that nearly all Blacks have been denied entry into the middle class for a variety of reasons, and experts (mostly White) are needed to solve this problem.

Endless hours are spent on talk shows and in classrooms arguing about what are the correct solutions to this alleged rampant inequality problem. White privilege is blamed. Slavery is cited. Reparations are urged. The whole country is in a frenzy about Blacks and the middle class. 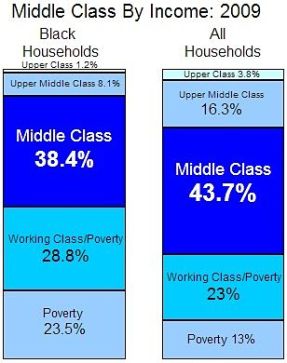 It has become a mantra that is diminishing the public’s image of Blacks in America, and it’s primarily a false narrative.

The chart on the right shows that less than 24% of Blacks in America were designated in poverty at the start of the Great Recession. Whites were 13%, still substantial, but far below the rate of Blacks.

But poverty in some ways is a blessing. while nobody wants to live in dire circumstances, there are subsidies in America for the poor. Free Medicaid pays for everything, even all drugs, dental and eyeglasses. Some poor pay $100 a month for a $1,000 apartment, others see utility bills cut to nearly nothing, and all are even provided free cellphones and service.

The next step up is the working class, which includes a higher percentage of the Black population than the White – 28.8% versus 23%. This class gets no special benefits, pays full freight for everything and has really suffered for decades from low wages and shortened hours. For many, their only way to escape the ravages of being working poor is to give up and become impoverished enough for government assistance.

And here’s where the numbers separate. Upper middle class Whites are twice the percentage of Blacks – 16.3% vs. 8%. The upper class White total of 3.8% is about three times the Black result.

What is interesting to me and what is overlooked by pundits and other “experts” is the fact that 67.2% of Blacks and 66.7% of Whites are in either the middle or working class. This same two thirds of all Blacks and Whites are struggling to pay bills, buy houses, fix cars, seek affordable healthcare.

Some of the differences in the upper income category can be attributed to inheritance. The annual income (7%) on five million from grandpa would be about $350 thousand, putting one in the upper class without even working. Legacy placements at top colleges always help ensure future top jobs. No student debt is an option for a few. Such advantages are the accident of birth, not discrimination by society.

What we really need is to bring more good jobs back to America, and insure better schools and decent neighborhoods for poor Blacks and Whites. Fake news that Blacks grossly underachieve has only made race relations worse, dividing our country, spoiling our common dreams.

One thought on “Fake news portrays American Blacks as lower class, victims in desperate need of help from politicians”