Warren Buffett is the best known man in Omaha, Nebraska – a hometown boy, fourth richest person in the world, and admirer of Hillary Clinton. That friendship, her speaking style and his popularity – combined – couldn’t fill the Omaha North High School auditorium, even after some of the stands were packed with too-young-to-vote schoolchildren.

There are times, such as yesterday in Nebraska, when even the wealthiest skinflint in the world must feel defeated.

Meanwhile, Donald Trump is turning away thousands at some rallies, attracting record audiences for a Republican candidate, throngs comparable to the crowds produced for Bernie Sanders, who was also running against Hillary.

What is going on here? How can a woman, who has earned millions of dollars in speeches authorized by CEOs of major corporations, not attract a crowd? You would think that anyone. who was paid $300,000 or more for a speech, must be a great speaker, and gee whiz, here’s a chance to hear her – no charge.

Following a reflective lapse after a glass of burgundy, I concluded that Hillary is not a great crowd thriller, so reports of her making so much money from talking to big business and their lobbyists must be exaggerated. Maybe, I wondered for her sake, there were a couple talks here and there, and that “right wing conspiracy” was just pretending that she received huge fees for many talks. 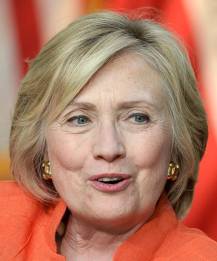 You can check things like this, even if they don’t show up on your favorite search engine. Here, the best source would be the financials that Hillary was required to file last year as part of her bid for the Presidency. This is a PDF of that filing, that you can download. (The parallel PDF for Donald Trump and my comments on his 94-page report will appear here next Tuesday.)

Speeches are paid for with honorariums: In 2014 (full year prior to filing) the following amounts were paid to Hillary – not to her campaign, Super PACs, or the Clinton Foundation, but only to her, personally.

In chronological order, the amounts and sources, beginning January 6:

The median pay for an American worker in 2015 was $28,851.21. Hillary’s average speech, even counting those beamed by satellite, was $232,190 – for just an hour’s or less work. That single average hour by Hillary reaped as much money as the total wages of someone working daily 9-5 for a total of eight years.

Hillary’s approximate 42 hours of work (one week plus two hours overtime) for all speeches earned her enough in 2014 to pay the full time salary of an average American for 346 years. One week for nearly 3.5 centuries!

She is not alone. Life after politics has become a fertile field for sowing millions from overgrown corporations and their lobbying groups. It looks bad and smells bad, reeking of past favors repaid and ignoring the public in favor of private crony capitalists and their vassals.

Supporters excuse  Hillary for a system that allows her millions for minor effort. Like other elected officials who promise changes, she knows her real dilemma is that you cannot fill a pit, when you’ve dropped to the bottom of it. The trick is to stay out of it in the first place by not trading for favors.

3 thoughts on “Hillary Clinton earns millions as speaker for CEOs, but can’t fill a high school gymnasium in Omaha”