As the Teddy “Scare” Cruz supporters battled yesterday to disrupt the Republican convention, first with the Rules Committee and then by crying about their squishy feelings on television shows anxious to show the GOP has fractures, the last thing you would expect is a mole inside the Trump campaign, a traitor, someone with ingrained hatred and an agenda to defeat the presumptive nominee – no matter what, and hiding like a viper, waiting for the death strike.

This morning the pundits were at work. Even Mika Brzezinski (daughter of the co-founder of the world government cabal Trilateral Commission) was pretending outrage and her superiority over Melania, explaining how Mika could have written a better speech in just two hours.

The controversy concerned several phases in Melania’s address to last night’s convention that were similar, but not identical, to a speech by Mrs. Obama in 2008. Some Hillary Clinton fans called Melania a plagiarist; others said her reputation was forever ruined. All this, because she read a speech!

What is the truth? 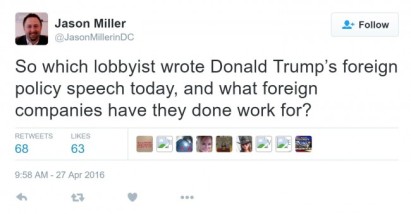 Who is this Jason Miller? What role did he play in writing the speech that was poorly done, badly enough to raise charges of plagiarism? Why would he be the final authority and editor in charge of Melania’s speech – the person ultimately responsible for this gaff and humiliation of the candidate’s wife.

Jason said this today after the critics attacked Melania::

“In writing her beautiful speech, Melania’s team of writers took notes on her life’s inspirations, and in some instances included fragments that reflected her own thinking. Melania’s immigrant experience and love for America shone through in her speech, which made it such a success.”

Jason is the Senior Communications Advisor for Donald Trump. The man who should be in charge of speeches and public relations. He used to have a similar title before being hired on June 27.

His old position was the Senior Communications Advisor for the Rafael Cruz campaign. There, he brutally and constantly bashed Trump as the accusations flew against “Lyin’ Ted,” so too did Jason go on a crusade to label Trump as #SleazyDonald

The Jason tweets that appear on this blog have been recently deleted, but are available as screen shots, thanks to Media Lite and other sources. They show the hate that Jason displayed against Trump.

If you were Trump, would you trust this guy with your public image? How far does “turn the other cheek” go when running for President?

The GOP’s symbolic “radical Islamist terrorist” – masquerading as a refugee – is not the only potential Trojan Horse.

One thought on “Is Melania the victim of a crooked Trump advisor?”