Whether you like a candidate or not, ask yourself what kind of behavior should be accepted – even promoted – by the public media, when an event is held in a private venue? Were you shocked when a mob screamed and tore up signs just to disrupt a rally in Chicago? Is there any difference between a rented hall and a church, synagogue or mosque? Finally, what distinguishes a private, ticketed rally being swarmed, and the same crowd descending into your living room and screaming at you?

Jaymal (aka: Jamal) Green was interviewed (in the video above) by Megyn Kelly on FOX News Friday night, last week, and he was treated as a community activist. He opposes Donald Trump, and said that is why he led the effort to cancel the Chicago rally. 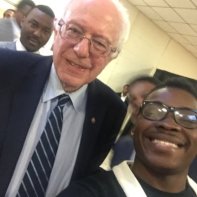 Megyn has many guests like this, who dislike Trump, and frankly it’s beginning to remind me of two co-workers having a secret affair, but constantly arguing at work to hide their romance from the rest of the staff.

In the spirit of searching for a new John Galt, a few keystrokes revealed that Jaymal’s Twitter page is called Your Favorite Singer and uses a picture of Bernie and Jaymal together, as the profile shot. For those into music, Jaymal has even written a theme song for Sanders, which he sells for 99 cents on cdbaby.  But (for a limited time only) you can hear it free on this blog.

More keying brought up Jamal’s ties to the Chicago political establishment. In August 2012, Chicago Police invited Ja’Mal (another name he uses) Green “to keynote speak for a youth march. After inspiring so many young people, Ja’Mal was invited again to speak and he was given the community leadership award by the new (police) superintendent Gary McCarthy.”

Last year he became Chicago’s Put The Guns Down Ambassador and served from June 2015 to August 2015. His job was described as:

Ambassador for the Put The Guns Down campaign partnered with Mayor Rahm Emanuel in efforts to reduce gun violence in the city of Chicago. Being the face and role model for youth going into the school systems and attending events. 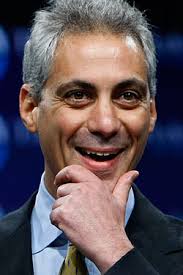 Mayor Rahm Emanuel (Blue Dog Democrat) served the Bill Clinton administration in the 90s, where he was the Assistant to the President for Political Affairs and Senior Advisor to the President for Policy and Strategy. Recently, he was also chief of staff for Barack Obama, and earned infamy for horrendous negotiating with the drug companies, while establishing the basis for Obamacare.

Ja’Mal describes himself on LinkedIn as Rnb Entertainer | Ghost Writer |Published Author | CEO | ACTIVIST | Features / Bookings – Ayana@MajorGreenMusic.com| You can also hear his music at this website.

In a video published February 27, he addressed a rally on behalf of Bernie Sanders and was described as activist Ja’Mal D Green, of Skyrocketing Teens Corp., “now working for the Bernie Sanders campaign in Chicago.”

All of this shows that in just four years since high school, Ja’Mal has managed to work closely with Mayor Rahm Emanuel (Bill Clinton’s confidant and Obama’s chief of staff), pushed a career in music, became an avid supporter and speaker at Sanders’ rallies, organized a near riot against a Republican candidate, and spoke on behalf of objective protesting on a major news network.

Much as I admire Bernie Sanders for his past efforts to pass laws to control the financial industry, it is time for him to get his campaign free of hate and disruption of the rights of others. Jaymal seems like he will listen to anyone and change his mind easily – so a word from his hero should suffice.

P.S. For those of you entirely absorbed in social media, Jamal even has a Facebook page mostly devoted to extolling Bernie and promoting his videos, including the one below.

Live from the ground! @JaymalGreen says "we stopped Trump, Trump is a coward!" #LoveTrumpsHate #FeelTheBern pic.twitter.com/5uOXPzEpoX