Rep. Kevin Brady (R-TX), House Ways and Means Committee Chairman, pontificated about plans to cut Social Security on Thursday, last week, at the Urban-Brookings Institution Tax Policy Center, Washington, DC.  Brady wants to cut Social Security by not only raising the retirement age to 70, but also imposing means testing to cut benefits. He advocated “creating a true cost-of-living for seniors,” meaning using the chained-CPI cost-of-living adjustment formula to further reduce benefits. Chained CPI is lower than the CPI used to adjust everything else.

Brady’s only accomplishment, other than public office, was serving as an executive at the Rapid Cities (ND) Chamber of Commerce before he moved to Texas..

In addition to gutting Social Security he pushes for lower taxes, deficit reduction and (so-called) free trade. He wants to replace the income tax with a national sales tax. In short, he is campaigning to shift taxes from the wealthy to the middle class and to lower wages by exporting  our manufacturing overseas.

As senior member of the Ways and Means Committee, Brady has chaired the trade sub-committee and this year, became chairman of the health sub-committee, which puts him in the middle of congressional debate on Medicare and health care law.

While Brady is acting like a toady, the real world has a much different view of retirement and the age when you should get pensions or Social Security

The United States currently has the highest projected retirement age – 67 – of all 34 countries of the Organization for Economic Co-operation and Development (OECD).

No surprise, members of Congress may retire at 55 and get Social Security (as though they were really 62). There are no plans to raise politicians’ retirement age to 70, or to cut the added pensions of our frightening leaders. 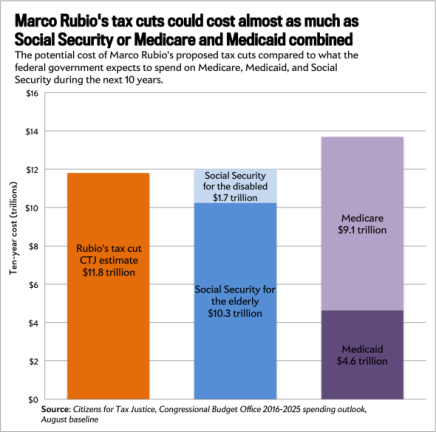 One simple tool to balance the books for Social Security is to raise the earning cap, so that rich people also pay into the national pension system based on their income. In 2035 FICA taxes may only pay for 79% of benefits, creating the need for more revenue, such as raising the cap.

The Center for Economic and Policy Research released a handy tool for calculating exactly when top earners stopped paying into Social Security this year. According to their calculations, a person, who earns a $1 million salary, stopped paying FICA taxes for 2016 on February 14th, Valentine’s Day. Try the tool to see when the top earners stop paying.

Finally, while the Brooking Institution and sessions like Brady’s retirement attack might seem to be the function of a think tank for progress, there are doubts.

In a New York Times article the Qatari government was named as “the single biggest foreign donor to Brookings”, having reportedly made a $14.8 million, four-year contribution in 2014.

A former visiting fellow at a Brookings affiliate in Qatar reportedly said “he had been told during his job interview that he could not take positions critical of the Qatar government in papers”. Brookings officials denied any connection between the views of their funders and their scholars’ work, citing reports that questioned the Qatari government’s education reform efforts and criticized its support of militants in Syria.

However, the Times reported Brookings officials also acknowledged that they meet with Qatari government officials regularly to discuss the center’s activities and budget, and that the former prime minister of Qatar currently serves on the center’s advisory board.

The retirement age in Qatar is 60.

2 thoughts on “Chinese women retire 17 years earlier than us, but moronic scolds want to hike pension age even higher”