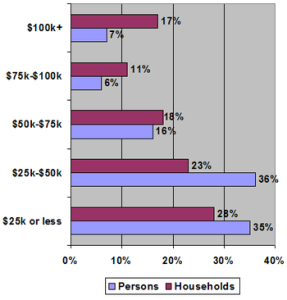 Most jobs pay about $31k. Many families have just one parent or one spouse working. Something doesn’t add up. Welcome to the world of making statistics lie to fool the peons into believing serfdom is almost as good as living in a castle.

First, the bad news for the poor. The government is reporting your household income much higher than your wages. You may be earning $20k at a lousy job, but Uncle Sam’s statisticians massage that number upward by adding:

Altogether there are 49 different sources of “household income” and many of them are substantial. For example, a healthcare plan like Medicaid for a family has to be worth $6,000 a year, even more since it has no $6k deductible and pays nearly 100% for everything from dental to eyeglasses. Grandma living with you? Add her pitiful Social Security payments to your household income. Win $50 in the lottery. Add it on to the total.

It is easy to estimate that household income for a family earning $20k –  eligible for many poverty line benefits – will have a government estimated “household income” twice actual wages. One conservative stink tank study showed a minimum wage worker with two children receives a real household income of $58k, but even $40k means a massive distortion of the mean income of Americans.

However, household income is also used by the government to show the rich aren’t really as rich as we “little people” would like to believe. The deal with the wealthy is to use rules to reduce their household income, so it doesn’t appear so huge. This is how that’s accomplished.

The result of all this number manipulation? The poor look richer. The rich look poorer. Proving once again that the road to false equality is paved with bad statistics, and not always good intentions.

From around the web….

While the “experts” were in Paris, someone should have mentioned: India’s nuclear industry pours its wastes into a river of death and disease

The Brits look at our economy by using phoney income numbers: The strange case of America’s ​disappearing middle class