The crazies who hate Jews often rave about the banks, Hollywood, Passover blood and, of course, Israel.

But what about chickens?

I don’t mean Jews and chicken soup used in place of antibiotics. Or that some haters say Jews are “chickens.” Nor do I bring up the White House spokesman who called the Israeli Prime Minister “chicken turd” or some term like that.

The true anti-Semites are obsessed with real chickens and real Jews, as in the following video, courtesy of  the radioislam.org site and the insane asylum where it was produced:

And for those of you who think this is isolated mental disorder, here are some stills (these are supposed to be shocking?) about Jews and chickens, also from the best little hate site in town – radioislam.org: 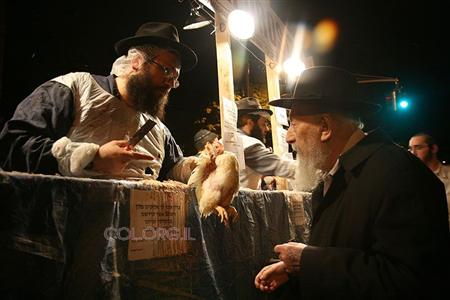 The actual ritual is Kapparah, which is practiced by some Jews. On the afternoon before Yom Kippur, the Day of Atonement, you obtain a chicken to be donated to the poor for consumption at the Yom Kippur meal, prior to fasting, recite the two biblical passages of Psalms 107:17-20 and Job 33:23-24, and then swing the chicken over one’s head three times while reciting a short prayer three times. In place of a chicken you can use a charitable donation, such as a bag of money and swing that.

Radioislam.org has its own explanation: “Kapparot is a Jewish custom in which the sins of a Jew are symbolically transferred to a fowl. The fowl is held above the Jew’s head and swung in a circle three times while certain words are spoken. The fowl is then slaughtered so that the Jew performing the ritual may have a good life.”