It was just shown by Giulio Haas, the ambassador of Switzerland to Iran, at a conference promoting the terrorist state. 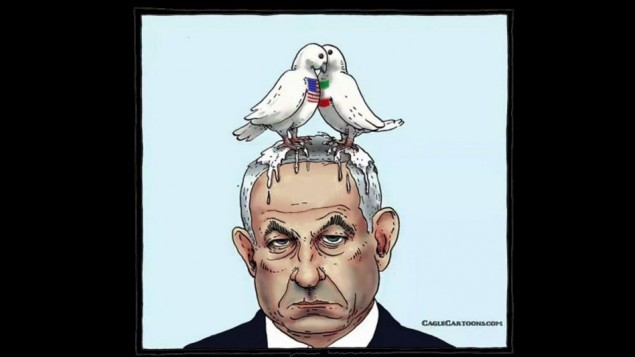 Reuters reported that the cartoon appeared on an enormous screen at the conference, under the headline “Iran: now or never.” The cartoon, Reuters said, was a commentary on “responses to the deal,” and showed a pair of doves with American and Iranian flags on their chests, sitting on the head of Israeli Prime Minister Benjamin Netanyahu.

The hateful cartoon was put up on a huge screen during a speech to hundreds of Swiss and Iranian business people at a conference in Zurich on Thursday (August 27), in which he also described Iran as a “pole of stability” in the Middle East.

“Ambassador Haas did not intend to insult anybody with the cartoon,” a Swiss government statement said. “If that is the case, however, he regrets it and seeks the pardon of everyone who could have felt insulted.”

The image appeared at the conference, under the headline “Iran: now or never.” The cartoon, Reuters said, was a commentary on responses to the deal, and showed a pair of doves with American and Iranian flags on their chests, sitting and s#itting on the prime minister’s head.

Haas said Thursday that his almost two-year stint in Tehran has made him certain that America will change its view of Iran as an aggressor.

“Iran at the moment is most probably the pole of stability in a very, very unsafe region,” he said. “Iran seems still for a lot of people to be bearded, elderly gentlemen with turbans. You see them, but you see not a lot of them, especially when you’re dealing with business.”

The dictatorial government-controlled Tehran Times had praise for the conference and offered this report:

Ambassador Giulio Haas was addressing some 500 Swiss business people in Zurich as Europeans race back to Iran, whose markets and oil will be much easier to tap once sanctions are lifted, under a global deal struck last month. “Iran seems still for a lot of people to be bearded, elderly gentlemen with turbans. You see them, but you see not a lot of them, especially when you’re dealing with business.”

Haas said his nearly two years in Tehran had convinced him Western perceptions of Iran as the world’s most aggressive nation were about to change. Iran at the moment is most probably the pole of stability in a very, very unsafe region,” he told the conference.

Experts cautioned that Iran remains a difficult market, telling the conference that bureaucracy, nepotism and corruption were common, as were the threat from product piracy and legal unpredictability.

Nevertheless, speakers described Iran as a “virgin market” of sophisticated consumers ready for business with the West.

“Be brave,” urged Ali Amiri of ACL Asset Management, an Iran-focused investment firm. “You’ve been to wilder places: Saudi Arabia, Egypt, Kuwait, South Africa, Nigeria. If you can bear those places, Iran is a walk in the park.”

The term “virgin market” probably refers to economic deals in the works – nuclear reactors from communist countries Russia and China, even the yields from a recent visit by Britain’s UK Foreign Secretary Philip Hammond to sanctify the former colonial power’s presence in Tehran.

Comments by CNN brings to mind “wilder places”, especially in the history of the reopened embassy:

The assault by student protesters on the UK Embassy and a separate diplomatic compound in Tehran in November 2011 prompted outrage and led Britain to close the embassy’s doors and withdraw all its staff from Iran. Britain also closed the Iranian Embassy in London and ordered all Iranian diplomats to leave.

The protest in Tehran was sparked by anger at UK sanctions imposed against Iranian institutions over the nation’s nuclear program. The embassy buildings should have been guarded by Iranian security officers.

It is a task to determine the most spineless nation, especially when the U.S. faces such stiff (upper lip) competition from both the Isles and the Continent.